Compact motorbikes have been gaining popularity among riders, particularly those in their 20s and 30s looking to add style to their riding experience. Scooters and motorbikes come with fuel efficiency of at least 30km per liter, making them especially attractive after oil prices soared to all time highs this spring. 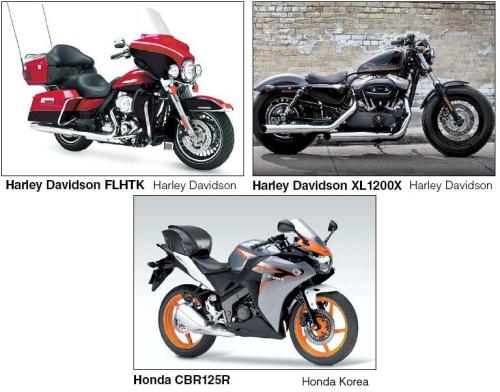 “We make half of our sales between March and July but our new model has been especially popular this spring because it has good gas mileage,” a Honda Korea representative said.

Honda Korea said its newly released CBR125R and CBR 250R have been topping the company’s sales chart since they were launched in March.

With a small engine capacity of 125cc, CBR125R boasts fuel efficiency of 57.3 km per liter, which is higher than most other models in the same capacity category.

“The CBR125R as well as the CRB250R have been great successes here, especially among those in their 20s and 30s. They bring together modern styling and engineering to the learner motorcycle category,” he said.

The two models have a fuel-injection system that benefits stop-start riding, making it an ideal choice for city riders. Prices start at 4.15 million won ($3,833).

The Korean motorbike market is dominated by local brands such as Daelim Motorcycle and S&T Motors, taking up about 70 percent of the market share. Well-known foreign players such as Honda, Yamaha, Harley Davidson and BMW take up about 10 percent and the rest is taken up by Chinese brands.

Industry experts say the market size will increase by about 20 percent by the end of this year. About 200,000 motorbikes were sold here last year.

Local brands have been focusing on making motorbikes with an engine capacity of smaller than 125cc as engine capacities above that require separate driving licenses other than the type most drivers have, the Type-II license.

Foreign brands, on the other hand, brought in diverse engine capacities with more room for customers to add personal touches, which is part of the reason for their rising popularity among young people.

Harley Davidson says its most popular model, Electra Glide Ultra Limited, or FLHTK, boasts engine capacity of 1,690cc for high-end customers with a price of 46.02 million won. A special two-tone paint scheme on the front fender and lower fuel tank is available for the Ultra Limited.

Forty-eight XL1200X is more popular among the younger generation due to the lower price of 19 million won, the company said.

“The average age of our customers is 42 but more young people are choosing to become Harley Davison owners and XL1200X has been targeting those following the latest in fashion,” a Harley Davidson Korea representative said.