Randy "Macho Man" Savage, a larger-than-life personality from professional wrestling's 1980s flying-elbow heyday known for his raspy voice, brash style and the young woman named Miss Elizabeth who often accompanied him, died in a car crash Friday in Florida. He was 58.

A Florida Highway Patrol crash report said the former wrestler — whose legal name was Randy Mario Poffo — was driving a Jeep Wrangler when he lost control in Pinellas County around 9:25 a.m. The Jeep veered over the raised concrete median divider, crossed over the eastbound lanes and crashed head-on into a tree.

Police said he may have suffered a "medical event" before the accident, but the report did not elaborate, and it said officials would need to perform an autopsy to know for sure. 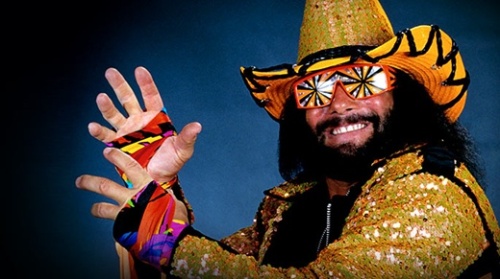 The report said a woman in the vehicle, identified as Barbara L. Poffo, 56, suffered minor injuries. A statement from Stamford, Conn.-based World Wrestling Entertainment said the passenger was the wrestler's current wife. Both were wearing their seatbelts, according to the police report.

"Poffo will be greatly missed by WWE and his fans," the statement said.

Savage was a charismatic wrestler made famous for his "Macho Man" nickname and his "Oooh Yeah!" catchphrase. He was a champion in Vince McMahon's World Wrestling Federation, and later Ted Turner's now-defunct World Championship Wrestling.

Poffo was under contract with WWE from 1985 to 1993 and held both the WWE and Intercontinental Championships.

"Our sincerest condolences go out to his family and friends. We wish a speedy recovery to his wife," WWE said.

Savage defined the mega-watt personalities of the 1980s World Wrestling Federation (now WWE). He wore sequined robes bejeweled with "Macho Man" on the back, rainbow-colored cowboy hats and colorful bandanas and oversized sunglasses, part of a unique look that helped build the WWF into a mainstream phenomenon.

For most of his career, his valet, Miss Elizabeth, was by his side. The woman, Elizabeth Hulette, was his real-life wife at the time. They later divorced, and Hulette died in 2003 at 42 in what was later ruled a prescription drug overdose.

Savage's death was not the first to catch the wrestling world by surprise.

Chris Benoit killed his wife and son and then committed suicide in their Georgia home in 2007; Benoit was 40.

Eddie Guerrero was 38 when he died of a heart attack in 2005 after a history of alcohol and drug problems.

Curt "Mr. Perfect" Hennig died of a cocaine overdose in 2003 at 44. That same year, Michael "Road Warrior Hawk" Hegstrand died from a heart attack at 46. He had battled alcohol and drugs, as well as steroids.

In 1999, wrestler Owen Hart, 33, was killed when he fell from an apparatus as he was being lowered into the ring from the ceiling of Kemper Arena in Kansas City, Mo.

The WWF made Savage their champion after a win over Ted DiBiase in the main event at WrestleMania in 1988.

Savage had not appeared for a major wrestling organization since 2004, when he performed for Total Nonstop Action.

He was at times both the most popular and most hated wrestler in entertainment. His flying elbow off the top rope was mimicked by basement and backyard wrestlers everywhere. Savage made good use of his deep, raspy voice as a corporate pitchman as well, for years ordering Slim Jim fans to "Snap into a Slim Jim!"

"There's probably five or six of us, with Andre (the Giant) and Hogan and thankfully myself and Flair, that, when their names pop up, even if you're not a fan, you know who in the hell these people are," said former wrestler and WWE Hall of Famer Dusty Rhodes. "You say, `I know this guy. I know Macho Man Randy Savage.' He was part of that breed. We lost a good one."

Dwayne "The Rock" Johnson hailed Savage as one of his childhood inspirations and heroes, while Mick "Cactus Jack" Foley called Savage "one of my favorite performers."

Hogan said he and Savage had just started talking again after 10 years.

"He had so much life in his eyes & in his spirit, I just pray that he's happy and in a better place and we miss him," Hogan wrote.

While so many personalities who left the WWF for WCW like Hogan, Roddy Piper and Mean Gene Okerlund were welcomed back to the company and even inducted into the Hall of Fame, Savage never returned.

Rhodes said Savage had prudently saved his money and was content to remain out of the spotlight.

"He was a recluse, almost," Rhodes said by phone. "Whatever he was doing, he wanted that privacy. Yeah, he was out of the picture for 10 years, but he didn't want to be in the picture."

Savage was a minor league catcher in the 1970s for St. Louis and Cincinnati before turning in the uniform for tights. His father, Angelo Poffo, was a longtime wrestler, and his brother, "Leaping" Lanny Poffo, was also a 1980s WWF mainstay. Condolences from fans poured in to Lanny Poffo's Facebook page on Friday.

Funeral arrangements were not immediately available.