Milkshakes so thick they require a spoon and floats topped with scoops of ice cream are classic American drinks that stir up fond memories of the 1950s, when the soda fountains, burger joints and diners that served them abounded.

Even today, that is where you will most likely find them, served up with a burger and fries, which, according to Brooklyn the Burger Joint owner-chef Park Hyun, is precisely why he decided to put nine shakes on his menu when he and co-owner Kang Hyo-jung set up shop in Seorae Village last year.

“This is a burger joint,” the 31-year-old explained. “I think that burgers, fries and shakes constitute the basics.” 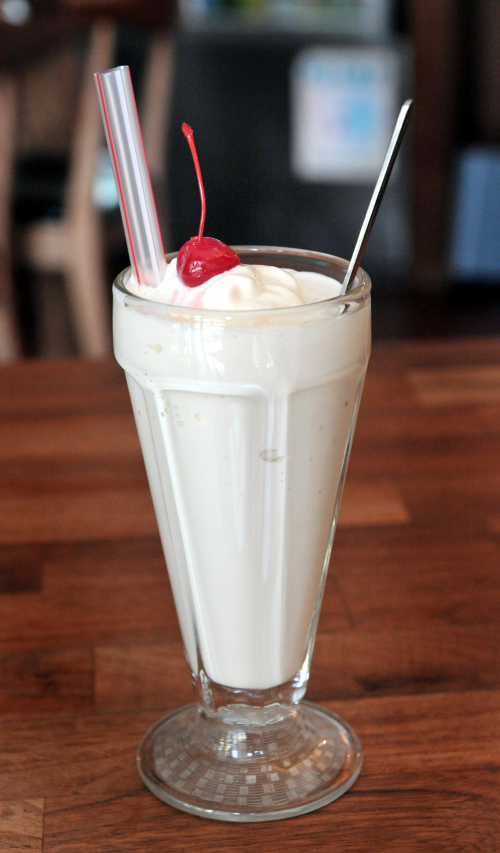 Brooklyn the Burger Joint’s Vanilla Classic Milkshake keeps it authentic by garnishing the thick and plush beverage with a ruby red cherry. (Chung Hee-cho/ The Korea Herald)
To get the American vibe and flavor down pat, Park toured the States and downed shake after shake.

For a truly authentic rendition of the popular summer drink, Park tracked down a three cup-sized Waring Professional Drink Mixer.

“We use a lot of ice cream to make our shakes thick so we need a machine like the Waring,” Kang, 27, said, after demonstrating how she hooks up the huge metal cups, sometimes two at a time, to the mixer and jiggles them as she churns out her creamy drinks.

Plush, rich and sweet, Kang’s shakes are the real deal. They are not high-end or fancy. Instead, they retain a hint of that crucial “junk food” taste that Park strives for.

Decked out in a T-shirt emblazoned with the statement “The Dude” on it, Park leaned forward and elaborated on how he uses American ice cream and chocolate for their drinks.

“All our shakes have a vanilla ice cream base,” he said.

Ghirardelli chocolate syrup is added to make the chocolate version, strawberry puree is used in their old fashioned strawberry rendition.

Both Park and Kang have done their homework, as evidenced by innovative and tasty beverages like their Nutella with burnt marshmallow and peanut butter and banana shakes.

Fluffy, white marshmallows that have been roasted over a flame garnish a shake that has been generously flavored with the toothsome hazelnut spread. The nuttiness of the spread goes exceptionally well with the toasted, golden crust of the marshmallows and its gooey innards.

Peanut butter and banana are churned up with vanilla ice cream to a chunky yet silken consistency for a decadent and filling shake.

The list goes on and includes Oreo, mint chocolate chip and banana choco shakes, all served up in tall fountain glasses with a straw and spoon. Customers can also get any of the shakes done up malted for an additional 1,000 won.

When it comes to ice cream sodas, Fork Fork, located near Garosugil, is the perfect diner to visit. The establishment, which opened two years ago, makes excellent brown and black cows a.k.a. root beer floats.

Tall glasses that have been chilled in advance are filled with scoops of ice cream, chocolate for a black cow and vanilla for a brown one and then topped with some A&W Root Beer, just enough to get it foamy and up to the brim.

The remaining soda in the can is served alongside the floats so that you can keep pouring in the root beer as you go along. 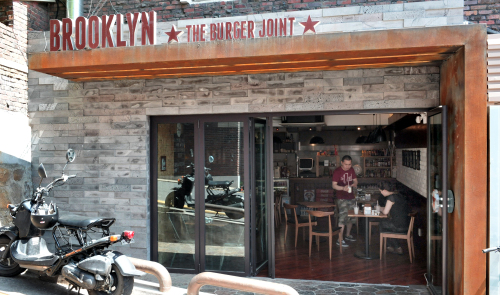 To get there enter Seorae Village from the road where the JW Marriott Seoul hotel and the Seoul Palace Hotel are located. Walk straight till you reach Paris Croissant. Turn left. Walk straight until you hit the end of the road. Turn right and walk approximately four blocks.

To get there go to Apgujeong Subway Station Line 3, Exit 5. Walk straight and turn left into the street between Shinhan Bank and Woori Bank. Fork Fork is located past Shingu Elementary School and Paris Baguette on a street to the right of a mart.