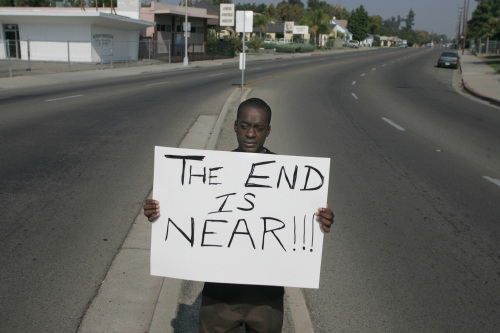 (MCT)
RALEIGH, North Carolina (AP) _ For some, it's Judgment Day. For others, it's party time.

A loosely organized Christian movement has spread the word around the globe that Jesus Christ will return to earth on Saturday to gather the faithful into heaven. While the Christian mainstream isn't buying it, many other skeptics are milking it.

A Facebook page titled ``Post rapture looting'' offers this invitation: ``When everyone is gone and god's not looking, we need to pick up some sweet stereo equipment and maybe some new furniture for the mansion we're going to squat in.'' By Wednesday afternoon, more than 175,000 people indicated they would be ``attending'' the ``public event.''

The prediction is also being mocked in the comic strip ``Doonesbury'' and has inspired ``Rapture parties'' to celebrate what hosts expect will be the failure of the world to come to an end.

In the Army town of Fayetteville, North Carolina, the local chapter of the American Humanist Association has turned the event into a two-day extravaganza, with a Saturday night party followed by a day-after concert.

``It's not meant to be insulting, but come on,'' said organizer Geri Weaver. ``Christians are openly scoffing at this.''

The prediction originates with Harold Camping, an 89-year-old retired civil engineer from Oakland, California, who founded Family Radio Worldwide, an independent ministry that has broadcast his prediction around the world.

The Rapture _ the belief that Christ will bring the faithful into paradise prior to a period of tribulation on earth that precedes the end of time _ is a relatively new notion compared to Christianity itself, and most Christians don't believe in it. And even believers rarely attempt to set a date for the event.

Camping's prophecy comes from numerological calculations based on his reading of the Bible, and he says global events like the 1948 founding of Israel confirm his math.

He has been derided for an earlier apocalyptic prediction in 1994, but his followers say that merely referred to the end of ``the church age,'' a time when human beings in Christian churches could be saved. Now, they say, only those outside what they regard as irredeemably corrupt churches can expect to ascend to heaven.

Camping is not hedging this time: ``Beyond the shadow of a doubt, May 21 will be the date of the Rapture and the day of judgment,'' he said in January.

Such predictions are nothing new, but Camping's latest has been publicized with exceptional vigor _ not just by Family Radio but through like-minded groups. They've spread the word using radio, satellite TV, daily website updates, billboards, subway ads, RV caravans hitting dozens of cities and missionaries scattered from Latin America to Asia.

``These kinds of prophecies are constantly going on at a low level, and every once in a while one of them gets traction,'' said Richard Landes, a Boston University history professor who has studied such beliefs for more than 20 years.

The prediction has been publicized in almost every country, said Chris McCann, who works with eBible Fellowship, one of the groups spreading the message. ``The only countries I don't feel too good about are the `stans' _ you know, Afghanistan, Uzbekistan, those countries in Central Asia,'' he said.

Marie Exley, who left her home in Colorado last year to join Family Radio's effort to publicize the message, just returned from a lengthy overseas trip that included stops in the Middle East. She said billboards have gone up in Israel, Jordan, Lebanon and Iraq.

``I decided to spend the last few days with my immediate family and fellow believers,'' Exley said. ``Things started getting more risky in the Middle East when Judgment Day started making the news.''

McCann plans to spend Saturday with his family, reading the Bible and praying. His fellowship met for the last time on Monday.

``We had a final lunch and everyone said goodbye,'' he said. ``We don't actually know who's saved and who isn't, but we won't gather as a fellowship again.''

In Vietnam, the prophecy has led to unrest involving thousands of members of the Hmong ethnic minority who gathered near the border with Laos earlier this month to await the May 21 event. The government, which has a long history of mistrust with ethnic hilltribe groups like the Hmong, arrested an unidentified number of ``extremists'' and dispersed a crowd of about 5,000.

No such signs of turmoil are apparent in the U.S., though many mainstream Christians aren't happy with the attention the prediction is getting. They reject the notion that a date for the end times can be calculated, if not the doctrine of the Rapture itself.

``When we engage in this kind of wild speculation, it's irresponsible,'' said the Rev. Daniel Akin, president of the Southeastern Baptist Seminary in Wake Forest, North Carolina. ``It can do damage to naive believers who can be easily caught up and it runs the risk of causing the church to receive sort of a black eye.''

Pastors around the U.S. are planning Sunday sermons intended to illustrate the folly of trying to discern a date for the end of the world, but Akin couldn't wait: He preached on the topic last Sunday.

No one will know for sure whether Camping's prediction is correct until Sunday morning dawns, or fails to dawn. In the meantime, there will be jokes, parties, sermons and _ in at least one case_ a chance to make a little money.

Bart Centre, an atheist from New Hampshire, started Eternal Earth-bound Pets in 2009. He offers Rapture believers an insurance plan for those furry family members that won't join them in heaven: 10-year pet care contracts, with Centre and his network of fellow non-believers taking responsibility for the animals after the Rapture. The fee _ payable in advance, of course _ was originally $110, but has gone to $135 since Camping's prediction.

Centre says he has 258 clients under contract, and that business has picked up considerably this year. But he's not worried about a sales slump if May 21 happens to disappoint believers.

``They never lose their faith. They're never disappointed,'' he said. ``It reinforces their faith, strangely enough.''