[ The Korea Herald – Send E-mail ]
Endoscopic management of urinary stone disease
By 배지숙
Published : May 19, 2011 - 18:13
Updated : May 19, 2011 - 18:13
Urinary stones are hard buildups of minerals that form in the urinary system and cause urinary tract infection, the obstruction of urinary flow and sometimes renal dysfunction. They may also be accompanied by pain and bleeding.

The structural order and chemical components of a urinary stone, as well as abnormalities shown in the urine, began to be unraveled in the 20th century with the advent of advanced techniques to analyze chemical components and the development of microscopes.

Many theories have been presented to identify the causes and mechanism of urinary stone formation, but the secrets are yet to be revealed. The number of patients diagnosed with urinary stones is on the increase in Korea with improved quality of life and westernized dietary preferences.

Treatment options for urinary stones vary according to location, size, shape, chemical compounds, severity of infection, severity of renal damage and the condition and age of each patient. If urinary stones are small enough, expectant therapy can be performed, guiding patients to drink large amounts of fluid to help pass the stones through the urinary system and giving them medication for pain control.

However, further treatment may be needed, even for stones measuring five millimeters or less, in case pain persists; the symptoms of fever, nausea and vomiting are due to urinary tract infection; and the stones cannot be discharged through the urinary system in this case.

More aggressive treatment options include open surgery and non-invasive endourologic lithotripsy. In the past, most physicians resorted to open surgery with some exceptions in the use of remedies to dissolve the stones. However, with the creation of Extracorporeal Shock Wave Lithotripsy (ESWL) in the mid-1980s, most patients are now treated with this non-invasive endourological procedure.

Since Chaussy and his colleagues first succeeded in breaking up renal stones in February 1980 using ESWL, this procedure has been employed by an increasing number of physicians as a primary treatment option for renal and upper ureteral stones due to many advantages.

It has a proven track record; it is non-invasive; and it is an outpatient procedure requiring no anesthesia. However, the success of ESWL heavily hinges upon the chemical compounds and location of the stones. In addition, it cannot be performed on expectant mothers, patients taking anti-coagulants, and those with a bleeding tendency.

It should be performed with caution for patients carrying pacemakers, diagnosed with abdominal aorta aneurysm or with infections. The comparatively extended periods of treatment are also considered another drawback.

Endourological treatment of urinary stones has reached a new height recently based on the notable development of devices and techniques.

With the advancement of endourology, evidenced by rigid and flexible endoscopes with of a smaller size and higher resolution, and the creation of Ultrasonic Lithotripter, Electrohydraulic Lithotripter and Laser Lithotripter in the late 1980s, it has become much more convenient for surgeons to crumble urinary stones, and most cases are now treated by endourological procedures in lieu of open surgery. 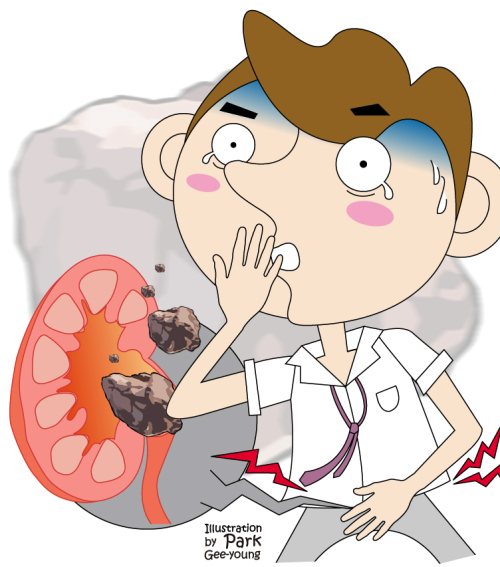 Percutaneous Nephrolithotomy (PNL), an endourological treatment option first put into operation by Rupel and Brown in 1941, was further enhanced by Smith and his colleagues in the late 1970s to more accurately target the stones located in the renal pelvis and upper urinary tract. This minimally invasive procedure remains the primary treatment option for larger-sized stones, powered by continued progress of endourological devices and radiological techniques. In addition, it proved to be effective for stones obstructing the urine flow, cystine stones, stones not cured by ESWL, and stones showing any anatomical deformity. Though it carries increased risk of bleeding due to the fact that the endoscope has to pass through the skin and renal parenchyma (percutaneously), it is one of the treatment options most preferred by experienced practitioners due to its high success rate.

Since Perez-Castro Ellendt and Martinez-Pineiro first performed Ureteroscopic Lithotripsy (URS) in 1980, ureteroscopy has become a standard procedure in urology, being applied to different clinical situations for both diagnosis and treatment.

The ureteroscope used for the procedure is a thin imaging instrument, with the external diameter of its tip measuring only two to three millimeters.

It is mounted with a camera lens, an optical source and a fiber laser, and inserted directly into a cavity of the body. Its indications continue to expand with the recent clinical application of Holmium: YAG Laser, which delivers sufficient energy to crumble stones with the fiber laser measuring approximately 0.3 millimeters and the development of a smaller-sized endoscope providing improved resolution with its tip designed to deflect up to 270 degrees.

A slew of comparative studies on the impact of URS and ESWL on urinary stones has been conducted and made public. Though more invasive than ESWL, URS is more preferred nowadays because it boasts a higher removal rate and shorter treatment time.

Both procedures demonstrate similar success rates for lower ureteral stones, but the pros and cons are different.

ESWL is non-invasive, but it may require additional treatment afterwards. URS can remove the stones with one single procedure, but the patient must be put under anesthesia. As for middle ureteral stones, ESWL can be effective, but it may sometimes fail to accurately locate the stones. Thus, URS is more preferred. As for upper ureteral stones, ESWL has long remained a primary treatment option.

However, more and more studies indicate that the success rate of URS is beginning to outpace ESWL backed by the recent development of flexible uteroscopy and laser lithotripsy. URS is also emerging as an alternative treatment option for lower calyceal stones that are not crumbled with the use of ESWL or not discharged with natural remedies.

As explained above, URS may be performed for all types of urinary stone, but has been considered to have such contraindications as deformities of and damage to the lower urinary tract and anatomical deformities incurred by previous operations, which prevent the retrograde approach.

However, such contraindications are gradually being overcome, and clinical indications are being successfully expanded through continued improvements to the design of uteroscope, the development of cutting-edge lithotripters and accessory instruments, and endeavors to enhance ways for ureteral access.

The author is a clinical assistant professor of Samsung Medical Center. ― Ed.