Carlos Tevez scored twice to take his league tally to 21 goals this season ― equal top with Manchester United striker Dimitar Berbatov ― as Man City moved past Arsenal to claim third place in the Premier League with one round remaining.

Making his first league start since injuring his hamstring five weeks ago, Tevez played a one-two with James Milner before beating two defenders inside the box and smashing the ball into the net to put City in front in the 14th minute at Eastlands. 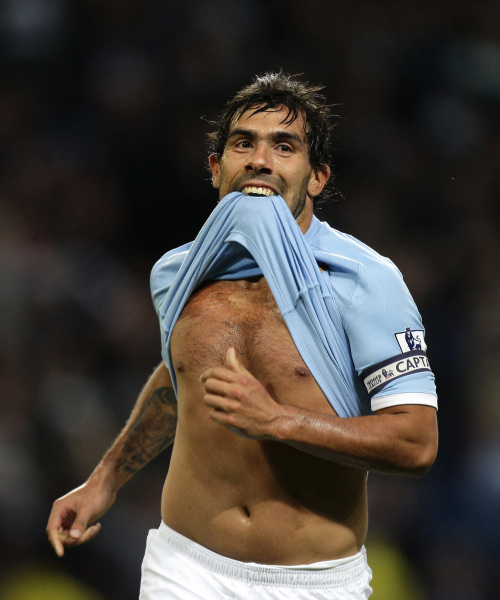 Manchester City’s Carlos Tevez celebrates his goal against Stoke. (AP-Yonhap News)
The Argentina forward curled in a free kick in the 65th to join Berbatov on top of the scoring list in the race for the Golden Boot.

The 26-year-old Tevez has been linked with a move away from City after submitting and then withdrawing a transfer request earlier this season. Manager Roberto Mancini, however, said the club captain had indicated he now wants to stay.

“He is a fantastic striker and a fantastic player for us. I think he will stay here next year. He doesn’t have a problem,” Mancini said. “I spoke with him many times in the last 20 days. It is my opinion that Carlos stays here next season. In December, he had a problem. But everyone can change his opinion.