U.S. rock band Maroon 5 is coming to Korea again, three years after being blown away by more than 10,000 Korean fans singing along at their first concert in Seoul in 2008.

Led by Adam Levine on lead vocal and rhythm guitar, the five-member group will hold two concerts in Korea ― on May 25 at the Olympic Park Gymnastics Stadium in Seoul and on May 26 at the KBS Hall in Busan. Their concerts are part of Hyundai Card Super Concert Series, through which the Korean financial firm brings over renowned overseas artists to Korea to promote cultural exchanges beyond borders and nationalities.

Instead of weighted rock sounds, Maroon 5 pursues pop melodies and lyrics. Korean singer G-Dragon, a member of boy band Big Bang, once did a remake of “This Love” and it exposed younger Korean fans of K-pop to the American rock band. 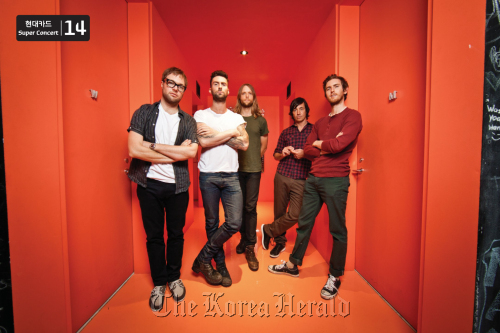 U.S. rock band Maroon 5 (Hyundai Card)
In their high school days, singer Levine, keyboardist Jesse Carmichael, bass guitarist Mickey Madden and drummer Ryan Dusick formed a band called Kara’s Flowers in 1997. After guitarist James Valentine joined the group in 2001, the band changed its name to Maroon 5 and released a new album “Songs About Jane,” which was an international success with songs such as “This Love,” ”She Will Be Loved” and “Sunday Morning” hitting high ranks in pop charts around the world. The second album, “It Won’t Be Soon Before Long” in 2007, produced hits such as “Makes Me Wonder.”

After the third album “Hands All Over,” released last May, the band is on world tour until December.

Tickets for Seoul and Busan concerts are priced from 77,000 won to 99,000 won. For details, visit privia.hyundaicard.com.

The following is an excerpt from an email interview with Maroon 5.

The Korea Herald: This is your second concert in Korea since 2008. What impression did your first concert leave for you, in comparison with your shows in other countries?

Maroon 5: We were blown away by the fans at the concert. Their energy was so amazing and we were so impressed they knew every word to every song! It was … one of the best crowds to ever play for.

KH: What kind of show should the fans expect from you this time? Is there is a particular performance you’re planning for the Korean fans?

Maroon 5: We’ve really put together what we believe to be our best live performance so far, so the fans can expect a non-stop rocking experience!

KH: What is music for Maroon 5? What is the single most important factor in your music?

Maroon 5: Feeling, a connection with the song through our emotions. We are able to perform the songs with great passion because we are emotionally connected to them.

KH: Nine years have passed since your first album. What is the biggest change that happened in that time?

Maroon 5: The maturity of ourselves as people, and as a band.

KH: If there is a role model you take as a band, who would that be?

Maroon 5: We look up to multiple artists, such as John Lennon, Bob Marley, Stevie Wonder. These guys had the courage to fight through their personal struggles to not only be successful in music, but to change music, and to bring change to the world through their music.

KH: Maroon 5 is immensely popular in Korea. Why do you think this is the case?

Maroon 5: Unsure; but very blessed and thankful for all our fans who support us in Korea, and we’re very excited to be back to visit you again!

KH: Do you have anything in mind for your next studio album?

Maroon 5: Yeah, we’ve come up with some ideas that we’re exploring while on the road to incorporate into an album.

KH: With your concert coming up, any message for your Korean fans?

Maroon 5: We know it’s been awhile and thank you for staying with us these years while we’ve been away. But we’re coming back to put an amazing performance for you guys and can’t wait to see you again!

KH: You guys are known for your commitment to the environment. Do you have any habit in your daily life that helps reduce carbon?

Maroon 5: Yeah, we’re into solar powering, hybrid cars and biodegradable products to name a few of the ways.

KH: Adam, among the songs of Maroon 5, what is your favorite and why?

Maroon 5: There are too many that I’m strongly emotionally invested in to name one.

KH: (To any member of the group) Do you have any rituals before the concert? (E.g. set the right temperature and humidity for the concert venue, never cut your hair)

Maroon 5: We all have a light yoga session shortly before going on stage to center ourselves and prepare for the show.