Everyone loves a good scandal.

Embezzlement, a fabricated academic degree, an affair with a high-level government official, and the woman-behind-it-all, former curator Shin Jeong-ah, kept the presses running with juicy fodder throughout the summer of 2007.

It was life imitating art ― the perfect soap-operatic story. One woman dupes the art world, climbs the social ladder and, almost, gets away with it.

It would have been a crime not to dramatize the scandal.

MBC picked up on the premise for their upcoming Monday-Tuesday night series.

While the backdrop was switched from art to hotels, the plot bears striking similarities to Shin, with heroine Jang Mi-ri (Lee Dae-hey of “The Slave Hunters”) lying about where she graduated from and manipulating two powerful men to get her foot in the door.

Inasmuch as the drama took its cue from her, Shin, who released a tell-all autobiography in March, told reporters at a press conference for her book that she intended to tune into the series.

That moment is not long in coming. The series, titled “Miss Ripley,” will start May 30. 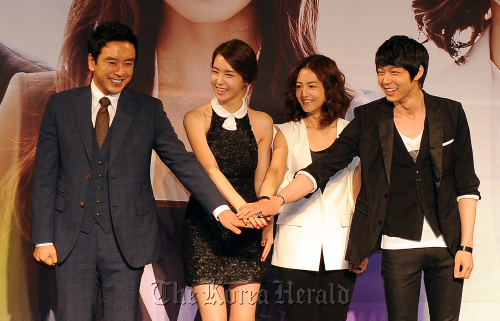 The cast of MBC’s “Miss Ripley” (from left to right) ― Kim Seung-woo, Lee Dae-hey, Kang Hye-jung and Park Yoo-chun ― cheer on their series at a press conference at Banyan Tree Club and Spa Seoul in Seoul on Tuesday. (Lee Sang-sub/The Korea Herald)
While Shin may have served as a motif for “Miss Ripley,” lead actress Lee was quick to assert that she will not be focusing on the former curator at the drama’s press conference Tuesday.

“A motif is just a motif,” the 27-year-old said. “They (Shin and my character) are completely different.”

Any such statement, however, will probably do little to deter audiences from making comparisons.

But as Lee said, “Miss Ripley” does not seem to derive inspiration from Shin so much as it is does from the movie adaptation of Patricia Highsmith’s novel “The Talented Mr. Ripley.”

The thriller, which was remade into a Hollywood movie featuring Matt Damon in 1999, details one man’s transformation into an identity-stealing murderer.

The hero, Tom Ripley, maps the darkest corners of the human mind. Through him, the audience explores the primitive human desire to become what one admires even if it means murder, forgery and lies.

It was after this character that the condition Ripley’s Syndrome was christened, and it is in heroine Jang Mi-ri, that the syndrome ― which refers to a psychological condition where the patient builds a delusional fantasy based on lies ― may manifest itself, albeit on a much less severe scale.

Actor Kim Seung-woo, who will be playing Jang’s love interest, confirmed that the drama was inspired by this syndrome and that, indeed, actors ― because of the nature of their profession ― may be quite susceptible to the condition.

“There is a reason why actors need to rest after they finish filming a work,” he said, before revealing that he has been receiving counseling to help him transition from his characters back to normal life as a husband and father for two years now.

Unlike the movie, however, which is bloody and tragic, “Miss Ripley” promises to read a little lighter.

Actress Kang Hye-jung, who is playing Jang’s childhood friend, said that the upcoming drama would be brighter and more hopeful than the film.

That does not mean that “Miss Ripley” will be a cheery fun-fest. According to actress Lee, the script has been very serious thus far, allowing little room for laughter.

Viewers will most likely find moments of respite in the romance that unfolds between Jang Mi-ri and resort empire heir Yutaka (JYJ member Park Yoo-chun).

Fans of Park, who his taking his second major stab at TV drama, can watch him act out the well-mannered and gentle hero.

“My character is always polite and smiles constantly but inside he is all sharp edges,” Park, one-third the boy band formed by three TVXQ idols-gone-independent, hinted that Yutaka is far more complex than he initially appears.

According to news reports, Park’s star power spurred the sales of the rights to air “Miss Ripley” in Japan where part of the series was filmed.