Campbell’s Fashion for Relief charity organized the Monday show and an auction that followed to raise money for the Japanese Red Cross to aid victims of the recent earthquake and tsunami there. 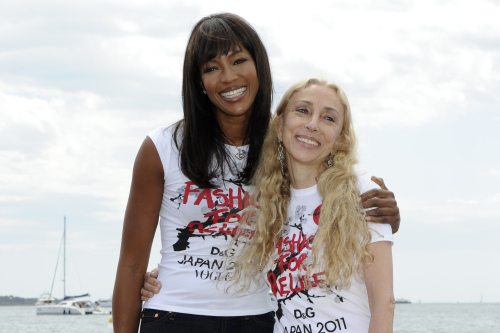 Model Naomi Campbell (left) and editor of Vogue Italy Franca Sozzani during a photo call for Fashion For Relief at the 64th international film festival in Cannes, southern France, Sunday. (AP-Yonhap News)
Scores of celebrities, in town for the Cannes Film Festival, turned out to support Monday’s event, while a small army of models donated their time, walking in red carpet-ready looks from Lanvin, Jean Paul Gaultier, Sonia Rykiel, Valentino and a host of other top labels.

From her front-row perch, Ivana Trump hailed the decision to hold the show in Cannes during the 12-day-long film festival here as “a brilliant choice.”

“All the rich people are in town for the festival, people in movies and in fashion, so they can reach into their pockets and give money to help,” said Trump, looking elegant in a black minidress with a bedazzled dipping neckline. She said she hadn’t yet seen any movies but planned to spend the final six days of the prestigious cinema showcase shuttling between her homes in Cannes, Monaco and Saint Tropez while attending some select films.

Another audience member, designer Peter Dundas ― whose label Pucci has long been considered an iconic brand in Japan ― said he’d turned out for Monday’s event because “Japan’s disaster is our disaster.”

“More than ever, we can’t think that just because something happens on the other side of the world it doesn’t concern us. Of course it does,” he said.

Editor-in-cheif of Japanese Vogue Anna Della Russo said the “it’s in the Japanese character to be really strong and optimistic” but “they really do need help.”

Asked whether she thought the disaster would affect the Japanese’s notoriously extravagant sense of style, the envelope-pushing style maven exclaimed, “I hope not because they’re so crazy about fashion like me and I don’t want that to change.”

In addition to the flock of professionals ― both from the current herd of young girls that rule today’s catwalks to industry veterans, led by Campbell herself, in a long lean black number ― models also included tennis champ Djokovic and Grace Hightower, who’s married to the president of this year’s Cannes jury, Robert De Niro.

At age 73, Fonda looked divine in a shimmering second-skin gown, while Dawson rocked a floor-length burnt orange number. The crowd devoured both, showering them in applause.

None of the nonprofessional models had any problems, but one of the hottest models of the moment was undone by her oversized meringue gown. She fell once and then again and again and again ― four times in a single passage ― before falling again her next time out, in a sundress and towering platforms.