In his first screen appearance, Thomas Doret plays Cyril, 11, who has been temporarily abandoned by his father at a foster home, and from the title to the final shot, Jean-Pierre and Luc Dardenne’s deceptive simplicity rules.

Any child’s reaction to such abandonment would be non-acceptance ― and Cyril is no different.

His anger is driven by incomprehension as he searches desperately for a way to exist through someone else after his most fundamental relationship has been severed, symbolized at the start by his father’s dead phone line. 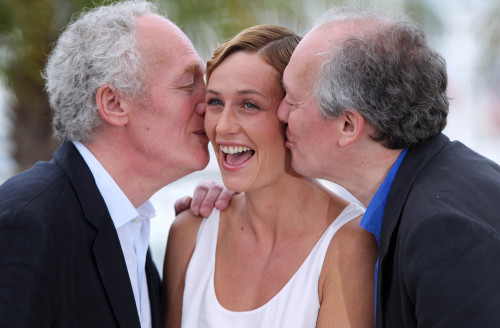 Belgian director Jean-Pierre Dardenne (left) and Luc Dardenne (right) kiss actress Cecile de France during the photocall of “The Kid with a Bike” at the Cannes Film Festival in France, on May 15. (Xinhua-Yonhap News)
The men he encounters along the way care little for his plight, until he literally stumbles upon hairdresser Samantha, played by Cecile de France, a Belgian actress who built her reputation in France and Hollywood.

For once the brothers wanted to work with a known actress, and they chose France, who ends up looking after Cyril, because of her “luminous and obvious presence,” Luc Dardenne told journalists after the screening.

The plot is based on a news story the brothers ― who also wrote the scrip ― heard in Japan about a boy abandoned by his father at an orphanage, and the brothers talked about the story for years, Luc said.

“It’s a love story: can the love of a woman help this child escape his violence?” said Luc.

Cyril is always on the move, whether trying to run away from his overseers at the foster home or just riding around on his beloved bicycle, resulting in some beautiful long tracking shots.

Jean-Pierre said the story is something of a fairy tale, with obvious parallels to Little Red Riding Hood ― the forest is a place of temptation, Cyril wears red, the big bad wolf is drug dealer Wes and Samantha is the fairy.

France, who starred alongside Matt Damon in Clint Eastwood’s 2010 fantasy drama “Hereafter”, said the Dardennes had “very little in common with Eastwood, it’s the opposite way of working.”

“Clint Eastwood doesn’t rehearse, he doesn’t come to the costume fitting, shots are done in one take,” she said.

By contrast, the Dardennes are passionate about rehearsals, regularly go through several costume changes to get it right and only one shot in the film required just one take ― of Cyril falling from his bike.

Luc said that during this production the team “worked in a more simple way ... we were more relaxed than usual, we rehearsed an enormous amount and became a tightly knit team.”

Jean-Pierre put it more bluntly: “If we don’t (rehearse), we’re incapable of turning up on filming day and knowing what we want, so we rehearse a lot.”

The Dardenne brothers are part of an elite club of only six double Palme d’Or winners ― including Francis Ford Coppola and Emir Kusturica ― having won in 1999 with “Rosetta” and again in 2005 with “The Child.”

Another success would make them the only film-makers ever to win three, and this year’s offering has much in common with their previous triumphs: dysfunctional Belgian families presented without sentimentality or moralizing.

Asked whether they were also more relaxed about the competition this year, Jean-Pierre said: “When you bring a film to Cannes there’s always tension, if there’s no tension then something’s wrong.”