Last week, the 43-year-old man, identified only by his surname Kim, invested in “put options” that appreciate when stock prices drop. He expected the blasts to panic investors into selling stocks, officials said.

Kim hatched the bombing plot after he had suffered heavy losses in futures transactions earlier this year.

On Saturday, police apprehended him and two other accomplices suspected of detonating two bombs just 30 minutes apart at Seoul Station and Gangnam Express Bus Terminal. The blasts caused no injuries.

The incident escalated public fears of terrorism, with experts claiming that South Korea could fall victim to attacks from international groups especially after Osama bin Laden, the leader of al-Qaida, was killed in a U.S. military raid in Pakistan on May 1. 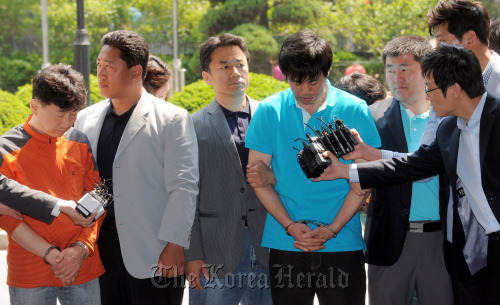 Two of the three men suspected of detonating handmade bombs at Seoul Station and Gangnam Express Bus Terminal last Thursday are taken to the Seoul Metropolitan Police Agency for interrogation Sunday. (Ahn Hoon/The Korea Herald)
After graduating from high school, Kim spent a total of four years in jail for special robbery, police said. They added that they had not found any evidence yet of a political motive.

“We judged that the explosions were not carried out by one with a strange antisocial personality who wanted to conduct an act of terrorism on many unspecified people for political purposes, but by one who wants to achieve economic objectives,” said an official, declining to be named.

After being released from prison in July 2010, he borrowed some 3 million won ($276,497) from his acquaintances and made large investments in futures. On the expiration date, which came in March, he lost them all, according to police.

He once again borrowed some 50 million won and invested it in put options Wednesday. Police say he sought to benefit financially from confusion on the stock market with the explosions on the expiration date Thursday.

Last month, Kim viewed instructions on how to make incendiary devices on the Internet, police said.

As the modus operandi for the two explosions were similar and they occurred only half an hour apart, police suspected that they were carried out by the same person with some accomplices.

After analyzing the closed-circuit TV footage from the two locations, police found one of the suspects. Using explosive materials left in the lockers, they also tracked down the whereabouts of the other suspects, officials said.

Police nabbed Lee in Incheon at around 12:30 a.m. on Saturday. They detained Kim in Yangpyeong, Gyeonggi Province at 5:45 p.m. Park was caught in Seoul at 9:10 p.m., according to officials.

Police plan to seek an arrest warrant for Kim and investigate the others without detention.