Outside the weathered storefront of Chuncheon Makguksu in Euljiro-4-ga, Seoul, patrons file in to grab a table and enjoy the establishment’s famed noodles.

Even past lunch hour, the restaurant is packed.

Bowl after bowl of the traditional Gangwon Province dish, “makguksu,” arrives. In the kitchen, a woman works with a contraption that makes the fresh buckwheat noodles ― the heart of this regional delicacy. 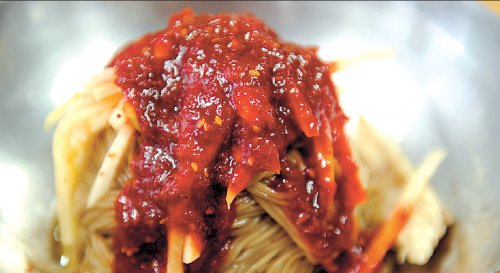 Thin and soft, the noodles hold up well against the spiciness of the “gochujang,” red pepper paste, that coats every strand.

Pieces of chicken and shredded, seasoned daikon radish bring chewiness, crunchiness and a sweet coolness to the makguksu.

A chilled noodle dish akin to naengmyeon, makguksu became a Gangwon Province delicacy partly because that is where its main ingredient, buckwheat, was widely cultivated.

The name translates to “rough noodles,” a moniker that is commonly interpreted to either refer to the “lowbrow” image of the dish or to the use of “rough” buckwheat that has only had its outermost layer removed.

Chuncheon Makguksu owner Kim Jong-nyeo ― who first opened in Seoul in 1969 and moved to her current location in the early 1970s ― related how the dish was customarily enjoyed as a nighttime snack.

After “gimjang,” winter kimchi, and “dongchimi,” radish water kimchi, were made during the autumn, buckwheat noodles were cooked, seasoned, garnished and served up in dongchimi or kimchi broth, or mixed in a spicy sauce to create a winter dish that would become emblematic of the province and of its capital, Chuncheon.

Now, it is a perennial delicacy, and a good way to escape from the heat of a fast-approaching summer.

At Kim’s establishment, small metal bowls of homemade dongchimi accompany their Chuncheon-style makguksu. A dish of leafy, green, young radish kimchi is the only side.

At Chuncheon Makguksu, every table sports bottles of vinegar, Korean mustard and huge kettles filled with a combination of dongchimi, beef leg bone and chicken broth so customers can eat their noodles ― made in-house from domestic buckwheat and a little flour ― any which way they want.

In fact, part of the charm of this dish lies in its versatility.

You can mix the noodles with its garnish of radish, chicken and gochujang sauce, minus any additional condiments, or pour a little cool broth over it for extra meaty flavor and then mix it.

Try topping each mouthful of noodles with some young radish kimchi ― a slightly, bitter green pickled vegetable ― for textural zing.

To enjoy it as a cold soup, submerge it in the broth from the pitcher, add a dollop of mustard, dribble the vinegar in and stir for a slurp-inducing, refreshing, slightly tart experience.

Down in Jamwon-dong at Bongpyeong Buckwheat Hometown, customers can chose from four kinds of makguksu.

Made in-house throughout the day from flour, sweet potato starch and buckwheat sourced from Bongpyeong, Gangwon Province, the noodles are slightly transparent, dark and flecked. 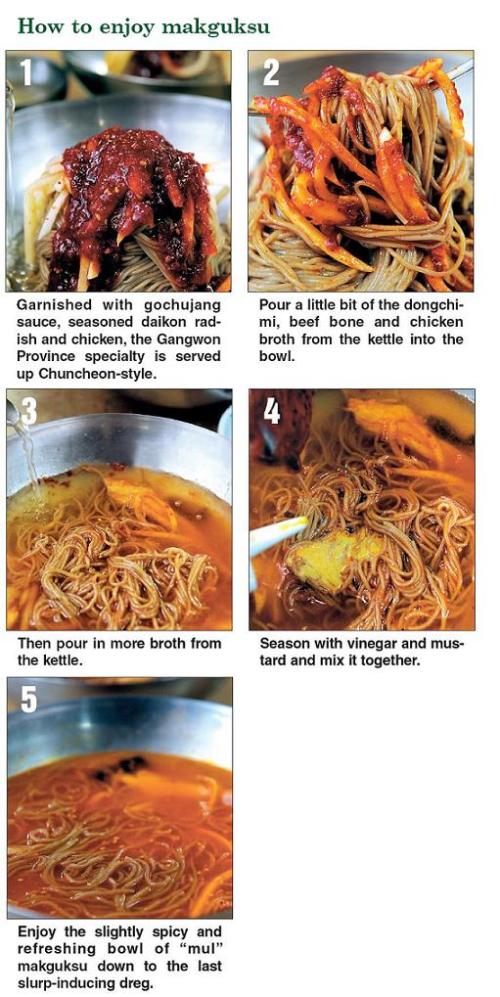 (Ahn Hoon/The Korea Herald)
When ordered up as “mul” makguksu, the noodles arrive in a gigantic metal bowl, served up generously, enough to feed two.

Floating in a beef leg bone broth that has been chilled into a brain-numbing slush, the buckwheat noodles are accented with sesame seeds, “gim,” laver, young radish kimchi, slices of cucumber and seasoned daikon radish. A gochujang-based sauce adds a kick to the soupy dish.

“We age our broth for about a week,” said owner Park Jeong-kyu, who adds that the aging process improves its taste and is the key to their dongchimi-free, Gangneung City-style makguksu.

Park said one way to enjoy both their “mul” and “bibim” makguksu is to add vinegar and mustard.

“The vinegar makes the noodles chewier,” he explained.

Bongpyeong Buckwheat Hometown, located near Sinsa Subway Station Line 3, Exit 4. Walk straight for approximately four to five blocks. Turn right into the street before reaching NonHyun Wedding Hall. Walk straight to a three-way fork in the road. Take the middle fork, the restaurant will be on the left. Open from 10 a.m. to 10 p.m. daily. Makguksu costs 6,000 won to 7,000 won. For more information call (02) 511-7888.