[ The Korea Herald – Send E-mail ]
Naju, where a long history flows with Yeongsan River
By 김윤미
Published : May 13, 2011 - 19:01
Updated : May 13, 2011 - 19:01
Naju lies at the center of the 137-kilometer-long Yeongsan River, which has fed the rich rice fields of South Jeolla Province for thousands of years since the Three Kingdoms of Korea. Naju was a city of such significance that the region’s name, “Jeolla,” was formed from Jeonju (Jeon) of North Jeolla and Naju (Na) of South Jeolla. 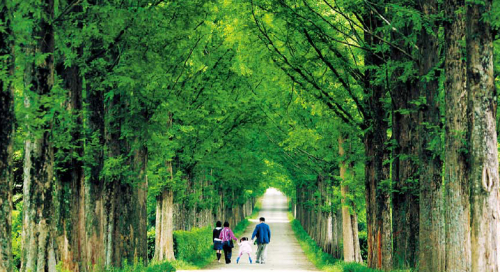 Sanpo Garden in Naju has a small and secluded metasequoia path. (Park Seong-won/Korea TourismOrganization)
Until just a century ago, Yeongsanpo, a small inlet town on the Yeongsan River, was the largest logistics and trade spot of the Jeolla region, gathering the sea food from the south coast and grains from the Naju Plain.

During the Japanese occupation in the early 20th century, Yeongsanpo became an outlet to ship grains of the Jeolla region to Japan. With a bank built at the mouth of the Yeongsan River, Yeongsanpo stopped being an inlet in 1981.

The first thing to see in Naju is the Yeongsanpo Guiding Light, Korea’s modern cultural relic No. 129. The small guiding light stands at the end of Yeongsan Bridge, which links the north and south of Yeongsan River and the endless fields of yellow rape flowers along the banks. The only guiding light on mainland Korea used to show the way for ships entering and leaving the inlet.

Leaving the guiding light behind and walking along the river, you will smell something fishy. Follow your nose and you’ll find Yeongsanpo Skate Street where restaurants and retailers specializing in skate line up around Yeongsan Bridge’s southern intersection.

Fermented skate originated in Yeongsanpo during the rule of King Gongmin of Goryeo in the mid-14th century. As Japanese pirates frequently invaded the South Sea area, the king made residents of nearby island Heuksando ― who liked to eat skate ― move to Yeongsanpo. People who missed skate went out to the sea to catch the fish which, on their way back home to Yeongsanpo, was naturally fermented.

Behind skate street, the unique patchwork of alleys continues to surprise you. Homes and warehouses built by Japanese capitalists during the colonial period still remain intact.

If you are a hallyu drama-lover, check out “Naju Image Theme Park,” where TV hits “Jumong” and “Taewangsasingi” were filmed. Scenes of the Buyeo Kingdom in “Jumong,” a natural dye plant scene from “Taewangsasingi” and another scene where Dam-deok rides a horse through a vast field were filmed in the theme park.

Dorae Village, a cluster of traditional Korean houses of the Pungsan Hong clan, is designated a national folk site. “The Old Houses” of Dorae Village, built in the 1930s, offer accommodation as well as a taste of various cultural practices.

Sanpo Garden nearby has a small and secluded metasequoia path, perfect for a walk in the spring.

● By bus: From Gangnam Express Bus Terminal buses to Yeongsanpo and Naju run six times a day each way. Call (02) 6282-0114. However, phone reservation is not possible.