[ The Korea Herald – Send E-mail ]
Daegu event shows readiness for world athletics
By Oh Kyu-wook
Published : May 13, 2011 - 18:23
Updated : May 13, 2011 - 20:12
DAEGU ― Daegu has successfully hosted an international athletics competition, which was interpreted as a dress rehearsal for this summer’s IAAF Word Championships, producing some world record-breaking actions from world’s top athletes.

But the pre-championships event also showed that the level of Korean athletes still lags far behind other competitors.

The Colorful Daegu Pre Championships meeting was held Thursday at the newly renovated Daegu Stadium, with more than 220 athletes from across the world competing in 16 events. 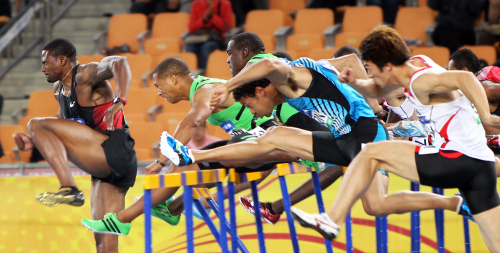 American David Oliver powers to victory in the men’s 110 meter hurdles at the Colorful Daegu Pre-Championships at Daegu Stadium on Thursday. (Yonhap News)
Korean athletes, however, failed to live up to expectations on Thursday, disappointing the home crowd and dulling anticipation of success in the upcoming championships.

Triple jumper Kim Deok-hyeon was the only home winner at the Pre-Championships. The 25-year-old Kim jumped 16.99m to claim the country’s only medal, beating 2008 Olympic medalist Leevan Sands, who was just 2cm behind with 16.97m.

Kim, however, revealed his disappointment after the competition, noting that he was aiming for 17.20m.

“I’m happy to win the title here, but I’m disappointed at my record today,” Kim said.

Kim’s record on Thursday was far from the world-record of 18.29m and even his national record of 17.10m.

In the women’s 100m hurdles, Lee Yeon-kyung, the 2010 Asian Games gold medalist, posted her season best with a time of 13.25 sec, only to finish seventh place among nine athletics.

National champions Yeo Ho-suah attempted to challenge with world-top sprinters, only to finish near last place with a rather disappointing time of 10.50 sec. Korean record holder Park Tae-kyong clocked 13.79 sec to finish sixth among nine competitors.

Even more worrying is the fact that all Korean athletes’ records ― excepting only Kim’s 16.99m ― failed to meet the qualifying criteria for the World Champions in August.

Despite the disappointing performance from Korean athletes here, Daegu has proved that it is now ready to host the world biggest athletics event.

The participants, in particular, showed satisfaction over the newly installed track field.

“The crowd wasn’t as much as I expected, but it’s great atmosphere and I’m excited about August,” he added.

The 2011 IAAF World Championships, one of the world’s top three sporting events along with the Olympics and the FIFA World Cup, is scheduled from Aug. 27-Sept. 4 in Daegu, some 300 km southeast of Seoul.

More than 3,500 athletes and officials, including thee-time Olympic gold medalist Usain Bolt, will be competing at Korea’s first ever world athletic competition.