Samsung Electronics appeared to be keeping its cool despite concerns about intensifying competition posed by global IT companies such as Apple, Elpida and Intel, with officials saying there was no cause for real alarm.

In addition to the latest move from Apple Inc., which in April sued Samsung for copyright infringement ahead of the local electronic makers’ release of new flagship products, smaller rivals are beating Samsung at developing new chipmaking technologies.

News of technological breakthroughs from these smaller yet powerful global rivals triggered worries from industry watchers here, but Samsung said there was no need for too much concern.

Choi Gee-sung, vice chairman and CEO of Samsung Electronics, on Tuesday said he was not “worried.”

“We’ve looked into the issue and concluded it was not too worrisome,” Choi said after seeing Samsung Electronics chairman Lee Kun-hee off on an overseas trip. “We’ll pull through this period, but we will still be staying on our toes and not become complacent.” 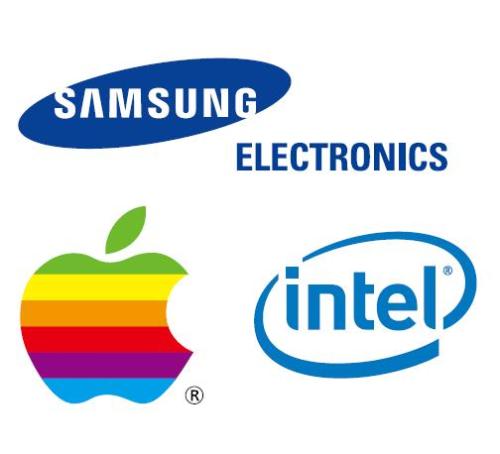 Earlier, the Samsung owner had spoken along similar lines, saying that he believes rival companies are out to keep “Samsung at bay.”

Apple more or less started the latest “tirade” against Samsung with its decision to go to court with a lawsuit against alleged copyright infringement. Samsung has countersued Apple, claiming the U.S. company infringed its communication technology.

Apple is not only Samsung’s biggest client, but also its most prominent rival as both are competing in the smart device market.

Shortly after Apple rolled out its iPhones and iPads, Samsung has been following with its version of smartphones and tablet PCs ― the Galaxy lineup.

From Japan, Samsung is being hit by Elpida, which is saying it will start mass-producing its new DRAM chips starting in July.

The company had fallen about six months behind Samsung Electronics in developing the 30-nanometer processed chips, but will now have a year’s head-start in the upgraded 25-nanometer chips.

This means that Elpida Memory has for the first time overtaken Samsung in the race to miniaturize microchip technology.

But Kwon Oh-hyun, CEO of Samsung’s semiconductor business division said at this week’s executive meeting that it will not act on Elpida’s word alone, and will wait until the Japanese chipmaker actually starts to roll out the products.

He noted that last year Elpida had said it was producing chips based on the 30-nanometer processing technology, but has yet to mass produce them.

Samsung is now reportedly considering pushing up the date for mass producing its own 25-nanometer technology memory chips.

Adding to the competition, Intel said earlier this month that by the end of this year, it will be mass-producing 3-D microprocessor transistors to be installed in its next generation semiconductors.

The new line of processors made from these transistors will be smaller, faster and perform at a lower voltage with less power leakage than before, experts said.