The International Exposition Yeosu Korea 2012 is now a year away from its opening and its organizers are stepping up the efforts to bring preparations to a smooth close.

The event, held under the theme “Living Ocean and Coast” will be held in Yeosu, South Jeolla Province from May 12 to Aug. 12.

According to the Expo organizing committee, construction of the site is 52 percent complete, and the process of building all of the pavilions and other structures will be complete by the end of the year.

The process of securing participants is now nearly at an end with the number of confirmed participants almost at the target number.

The Expo organizing committee set out with a target of 100 nations and, as of May 9, 95 participants had been confirmed.

“All preparations are being made flawlessly. Going for 100 percent completion by April 2012, and preparations for the ‘software,’ such as the content of the pavilions and cultural events are also planned to be complete by April,” said Korea Kang Dong-suk, chief of the Expo’s organizing committee.

“Originally the construction works were scheduled for completion in February, but the date was brought forward to allow for sufficient time for test runs and we plan to address any shortcomings or inconveniences.” 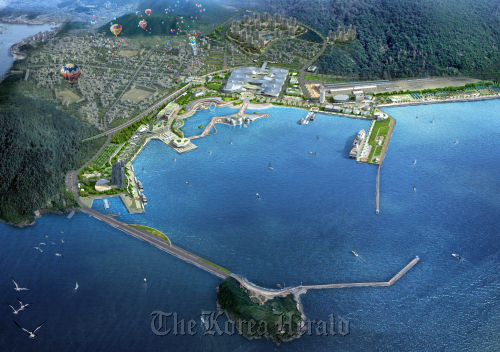 The site of the Yeosu Expo in Yeosu, South Jeolla Province, is under construction. (Yeosu City)
While each participant will operate their own pavilion, Korea will administer a national pavilion and one carrying the overall theme of the Expo. Also, it will operate four separate venues designed to showcase the sub-themes of 1) marine life, 2) climate and environment, 3) marine industry and technology and 4) marine civilization and marine cities.

According to the organizers of the Yeosu Expo, Korea’s national pavilion will be designed as a zero-carbon structure to represent the green growth drive that Korea will maintain after the event.

“The latest information technology will be applied to the Expo’s pavilions to show the visitors the vision for the future of the ocean and man kind in innovative ways and the site will be designed on a ‘human scale’ to allow visitors to go around the venues in one day,” an official with the organizing committee said.

The marine life pavilion will have floor space of 16,400 square meters and will be divided into distinct zones with each offering different experiences for visitors.

According to the organizers of the event, the pavilion will be designed with IT elements offering a “21st century” experience.

The organizers also plan to put threatened species such as beluga whales and Baikal seals on display in the pavilion.

Along with the pavilions, the event will also have three distinct structures ― the “Big-O,” Sky Tower and Expo Digital Gallery ― that will serve as landmarks during and after the event, the organization committee said.

The “Big-O” is an o-shaped space created on the sea by linking the breakwaters to land.

“On the water in the Big-O, a mobile stage will be installed as well as a fountain and the Ocean Tower,” an organizing committee official said. The Ocean Tower is a large O-shape structure.

“At 11 p.m. everyday, when the Expo closes, visitors will be able to view a show that combines laser and light effects, 3-D images, fireworks and the fountain.”

The second landmark, Sky Tower, will be created by renovating a 55-meter high abandoned cement silo. The structure, which had stood abandoned at the Expo site in Yeosu port, will be redesigned to serve as a multi-purpose building for the event.

“The outside of the silo will be designed as a functioning pipe organ that plays tunes including the Arirang, and visitors will also be able to play the organ using smartphones,” Expo organizing committee officials said.

The Expo Digital Gallery will be located on the 415-meter long street leading to the Expo site from Yeosu’s KTX train station. A part of the approach will be covered the walls and ceiling of which will be covered in LED screens. The screens will portray images of the sea, and visitors can send messages to a whale that swims in the digital seascape using smartphones and computers.