The Ministry of Culture, Sports and Tourism, Ministry of Knowledge Economy and Seoul Metropolitan Government pledged to cooperate on fashion-related projects under the agreement signed at Seoul Palace Hotel.

“What I have always heard from fashion insiders was that it would be a big help for the development of the fashion industry if many projects led by the Culture Ministry, Knowledge Ministry and Seoul City were organically connected and combined. It is a bit late, but the three organizations prepared a policy council,” said Kim Jong-yul, head of the Cultural Content Industry Office at the Culture Ministry. 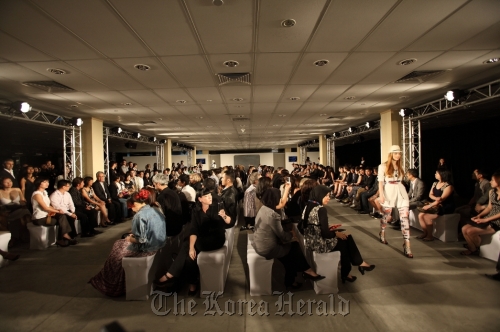 A view of the trade show “Blueprint” from Asia Fashion Exchange 2010. (Asia Fashion Exchange)
The organizations have launched many projects to promote South Korean fashion designers and fashion brands overseas in recent years. Although the projects were welcomed by fashion insiders, they were also criticized for being inefficient as they often overlapped with each other.

For example, under the same goal of promoting up-and-coming Korean designers to overseas markets, the Culture Ministry has been running a project named “Concept Korea,” the Knowledge Ministry, “Korean Preview in New York” and Seoul City, “Seoul’s 10 Soul.” They shared similar in content, encompassing a showcase and fashion fair.

The organizations will keep the names of the separate projects but will search for ways to better link them to one another.

Meanwhile, Seoul’s 10 Soul, a Seoul City-led fashion project, will hold a promotional event at ion Sky in Singapore on May 20 during Asia Fashion Exchange which will be held from May 13 to 22 at Marina Sands Bay.

Asia Fashion Exchange is composed of “Audi Fashion Festival” which will host a line of fashion shows featuring famous fashion brands including Missoni and Ungaro; a trade show named “Blueprint’; a fashion design competition titled “Star Creation” and an Asia Fashion Summit featuring 30 fashion experts from all around the world.