LG Chem CEO Kim Bahn-suk had much to say regarding the future of the car battery market and how the company plans to carve out a leading share of global markets. He also talked about LG Chem’s vision for its people, and how that vision helped turn the company around since he came to office in 2006, a time when LG Chem was struggling to come through a rough patch. The following are exerpts from an interview he had with The Korea Herald.

Kim: The inauguration ceremony in April was significant in that it was a chance to proclaim that LG Chem, with its battery technology, has opened a new global chapter of electric cars.

Executives from major global carmakers such as GM, Hyundai Motor, Renault Samsung and Ford also were present, which was unprecedented. It was due evidence that LG Chem is leading the global electric car and battery market.

Orders have been piling up faster than we expected, as seen in the pre-orders from Chevrolet’s Volt, pushing LG Chem to grow at a speed overwhelming its competitors at both home and abroad, and a pace capable of leading global markets.

We now plan to invest 2 trillion won ($1.85 billion) by 2013, which is double the 1 trillion won we originally envisioned. We also are aiming to complete our second plant in Ochang by 2012 and are simultaneously building the plant in Michigan in the U.S., and will add a third plant.

LG Chem is ultimately aiming for a 25 percent global market share by 2015 and sales of 40 trillion won.

KH: Do you agree with views that the electric car era will be late coming due to niggles such as prolonged recharging time, expensive battery prices and a lack of recharging facilities and infrastructure?

Kim: It will eventually take less time to recharge the batteries, and prices also will go down on lower production costs and procedural upgrades. But the improvements can come only based on consistent development of materials.

LG Chem is currently developing a second generation of electric car batteries under the name “Generation 2,” which are basically batteries that allow three times more distance, but cut production costs down to one-third of the current expenses. Cars using these batteries are expected to start being rolled out by 2014-2015.

The infrastructure related to battery recharging will require more support from the government. Charging stations are more than just a gas station, so they must be considered in line with high-tech systems such as the Smart Grid system. 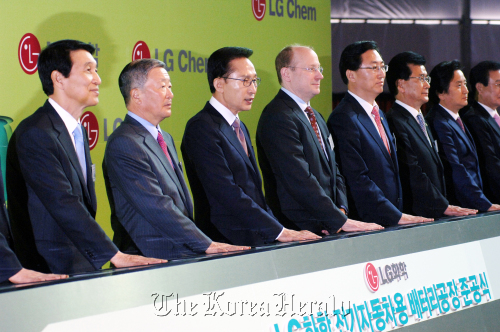 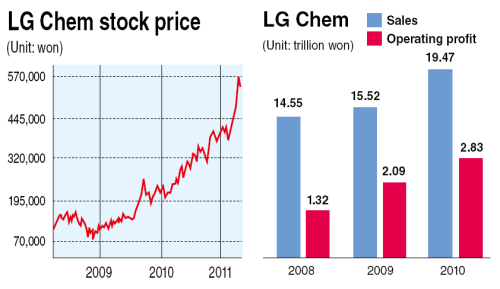 KH: How big will the car battery market become after 10 years? Also, how much will the battery business contribute to in profit?

Kim: The projections for the car battery market vary, but ultimately, they all point up.

As we are targeting a 25 percent share of the global battery market, the car battery business will no doubt become a significant pillar for profit at LG Chem.

KH: There is some concern about excessive competition and consequent oversupply. How will you overcome such challenges?

Kim: The car battery market is based on pre-orders and sales expectations, so there is little room for supply overdrive. However, competition will undoubtedly intensify as the electric car market picks up, meaning a downturn in profitability.

But this is actually a natural step that will help the electric car industry take off and allow the lithium battery market to further grow.

What’s important is how to differentiate oneself amid the competition.

LG Chem will continue recording high profitability based on its expertise as one of the first-comers in the market and its investment in R&D and production capacities.

KH: You have mentioned seeing investment opportunities in the U.S. and China. When will be the right timing?

Kim: One thing that is clear is that we will make an investment whenever we feel is the right time.

KH: What are your plans for procuring raw materials such as lithium?

Kim: We have reached the conclusion that there is sufficient supply of lithium, so there won’t be any problems here for some time.

However, securing lithium is still a very important part of our business, and it was good to see the government trying to play its part, such as with the MOU it signed with Bolivia for lithium supplies.

With other suppliers of materials that decide the quality of batteries, we will have to establish strategic ties for mid and long-term supplies.

KH: LG Chem had a good first quarter performance, but there are challenges, such as falling exchange rates. How will LG Chem continue on its upward path under such circumstances?

Kim: Our operating profit has grown more than 500 billion won each year since 2006.

And once our other new businesses such as electric car batteries and the glass plates for LCD panels are reflected in our business portfolio, our profit will further benefit. So for LG Chem, this is actually only the beginning.

KH: How do you envision LG Chem’s global status to be in the next 5-10 yeas, and how will you achieve that status?

To achieve these goals, we will promote our three “Speed Management” principles, which are “Aiming for No.1 in core business,” “Customer value creation,” and “Strengthening global organizational capability.”

To upgrade our core areas of business, we will be focusing on strengthening cost leadership, product leadership and market leadership.

To create top-of-the-line customer values, we will offer differentiated solutions so that our clients can become No.1 in their own areas. To do this, we will continue to strengthen R&D.

Our organization also will be promoted to a globally competitive one based on our philosophy of “one company, one vision.”

In terms of business portfolios, we plan to increase the portion of batteries and information materials to half of our business. Currently, petrochemicals account for 70 percent of our portfolio.

KH: As a rule, you attend every recruitment event in the U.S. and Japan. Is there a special reason?

Kim: LG Group has a strong tendency to value its people above all else.

This is why I believe it is a part of a chief executive’s job to go out and try to get the right people.

It would not be an exaggeration to say that the success of our new businesses hinge on how quickly we secure the right human resources to assign them to where they are needed.

This is why I place significant priority on the recruitment events, and why since I became CEO in 2006 I have never missed an opportunity.

KH: Training is also an important part of managing human resource operations. How does LG Chem train its employees?

Kim: LG Chem’s human resources system was rewarded for five times a row since 2006 by the Korea Management Association. Our system is that much recognized, and our training programs, in particular, are being benchmarked by many other companies.

LG Chem picks out employees seen as “High Potential Individuals” and offers them education and training opportunities alongside of their daily duties.

Some of these individuals are chosen to be fostered as global business leaders and even go on to be selected as candidates for future CEOs.

KH: LG Chem has definitely come a long way and is now one of the best performing companies in Korea. But when you first came to office in 2006, the company was facing overwhelming challenges. How did you overcome them?

Kim: To put it briefly, our business was turned around because our people changed. In 2006, LG Chem’s sales were growing, but its profitability was deteriorating.

So the management and I decided on a “speed management” strategy that basically called for increasing the pace of our business and the changes in our people by two-fold to bring about performance up four-fold.

To achieve this goal, we engaged in ‘earlier’ preparation, ‘faster’ results and ‘more frequent’ checks than our competitors.

The new strategy helped employees voluntarily push themselves to accomplish bigger objectives, and overcome their own limits.

The people power was also what helped us pursue and promote new businesses, such as car batteries.

KH: You have emphasized that employees must be able to recharge their batteries. Tell us more about this philosophy.

Kim: Our employees need to be able to recharge in time to be able to come to work the next day, bright and early, to focus on their duties. They also need to stay physically healthy.

My idea was to cut down on meetings and briefing sessions and let people decide when they should get home once the official work hours are over.

• Education: Graduated in Chemical Engineering from Seoul National University in 1976

• Motto: “Everything will be resolved if you make all-out efforts”