However, organizers also have a host of cultural events to entertain visitors.

During the 93-day expo, more than 3,200 performances and other cultural events will take place within the grounds.

The performances and events planned for the duration of the expo include large-scale parades and performances by Korean and foreign celebrities. 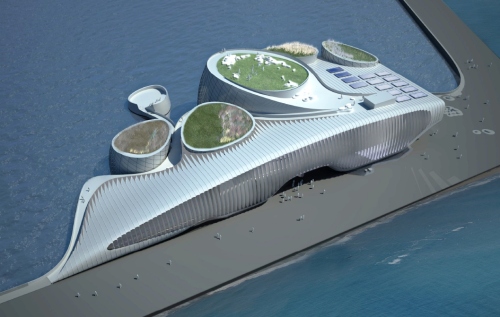 Computer-generated image of the Yeosu Expo’s main pavilion. (Organizing Committee for Expo 2012 Yeosu Korea)
In addition, “national days” will take place throughout the expo, during which participating nations will stage performances showcasing their cultures.

According to the organizing committee for the expo, so far 25 of the 95 participating nations have chosen to showcase a national day, and Spain is said to be working on arranging a performance by Placido Domingo.

The expo will also stage a variety of cultural performances from participating nations as well as online and offline programs for visitors, organizing committee officials said.

The organizers of the expo also plan to include international festivals with maritime themes, performances hosted by regional governments and a film festival also with a maritime theme.

To house such events, the expo committee is building several stages within the grounds including a 1,000-seat multi-purpose theater, floating stage and outdoor venues.

The floating stage will be located within the Big-O, a circular structure built by linking the breakwaters near the expo site to land.

The Big-O’s floating stage will also be designed to be able to sink up to 20 centimeters below the surface of the sea to create the appearance of the artists performing on water, the expo committee official said.

The Big-O will also provide the stage for a multimedia show each night at around 11 p.m. when the expo closes. The show will combine music with laser and lighting, 3D projections as well as fireworks and a fountain.

In addition, the Big-O will be the venue for performances from domestic and foreign celebrities that will be held twice a month during the expo and performances from famous DJs and dance music concerts held each weekend, the organizing committee official said.