A refrigerator that’s so smart it automatically updates you on what food should go in the trash. A washing machine that can diagnose its’ own malfunctions and suggest the right fix.

These are not home appliances from the next century; they are the gadgets available to the smarter users of today.

LG Electronics in April unveiled its smart fridge and washing machine in hopes of enticing busy consumers leading such hectic lifestyles they might not know what’s going bad in their fridge.

“The rising number of single households and double-income households is breeding a new generation of consumers who care more about efficiency in housework,” said Lim Young-min, a spokesman for LG Electronics.

The LG refrigerator offers a 10.1-inch LCD display of its contents once the user inputs the relevant data.

It also helpfully offers expiry dates and even recipes consumers can try ― helping solve the daily dilemma of figuring out what to do with that lone onion or carrot in your fridge.

One other feature consumers found exciting was that they could hook up kitchen appliances to their smart phones.

While grocery shopping, consumers can easily access applications that will promptly tell them what is in their fridge so they don’t double up on foodstuffs.

With more than one-fifth of the population now using smartphones, the close relationship between the phones and appliances was a marketable one. 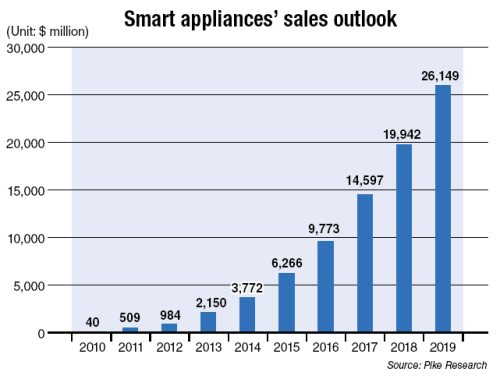 Experts agreed, as reflected in a recent report from market research firm Pike Research, saying the “smart appliance market is on the cusp of transitioning from the development state to commercialization and growth.”

Both manufacturers and consumers acknowledge that there are still a great many setbacks the industry has to address, noting that smart appliances are still a “work-in-progress.”

Some problems are due to technological limits and others involve consumers. Though smitten with the idea of less housework and more efficiency, many are still grappling with the concept of “smart appliances” and pondering if the new gadgets can truly improve their lives.

The idea of having a “Big Brother” appliance in their homes did not appeal to U.S. consumers according to studies and polls conducted by LG Electronics in South Korea and North America ― the Seoul-based company’s two largest markets.

Some consumers were turned off by the idea of an appliance that does everything of its own accord and “thinks” for itself, saying they “don’t want appliances thinking for themselves.”

They said they want appliances to stay in their stations and “just do their job,” according to surveys by The Nelson Company.

They also said they would like to be “in control of my kitchen,” and that real people should be controlling appliances, not the other way around.

South Korean consumers appeared more open to smart appliances, but also voiced reservations, not so much because of the “Big Brother” effect but because they were wary about any device that boasted of more than one key function.

Lee So-eun, a working mother of two, said she would have to actually use one to believe they are reliable and durable.

She also pointed out that it was not really a complete automation since she would have to input all the data on what went into her refrigerator. 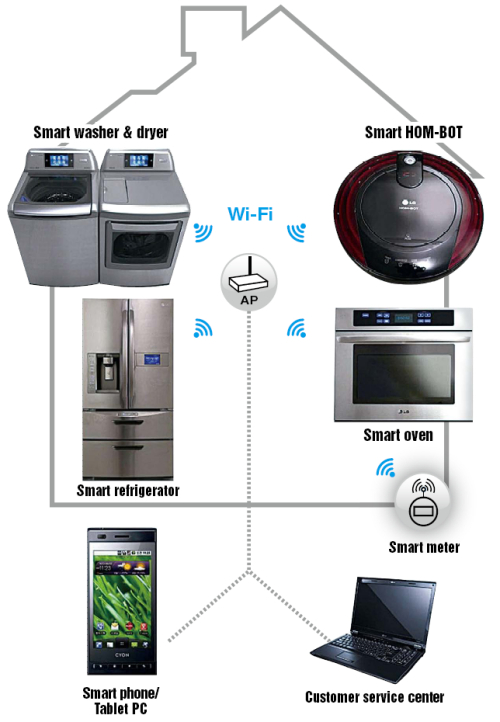 The bigger appeal, surprisingly, was actually the energy-saving features that the smart appliances offer.

Consumers in both the U.S. and South Korea were attracted to refrigerators that would save them energy by switching to “conserve mode” during certain brackets of time during the day or night when electricity prices peak.

These functions have yet to be fully automated, meaning the consumers still need to switch between modes when necessary, but LG Electronics said it believes it can realize complete automation when electric companies introduce a new system for billing consumers based on the time frame starting in July this year.

The concern about electricity bills and energy conservation, however, also meant that consumers were that much unwilling to fork over too much money no matter how smart the appliances got.

LG’s new smart refrigerator costs about 4 million won, which is about twice the price of the other “non-smart” refrigerators out in the market.

Consumers said they would only be willing to make an investment on smart appliances up to about 10-20 percent more expensive than existing products.

Lee, the working mother, said she was willing to try the new devices if the prices were right.

“I could give it a try, especially the refrigerators,” she said.