[ The Korea Herald – Send E-mail ]
Gaelic football team builds bridges on Children’s Day
By Paul Kerry
Published : May 10, 2011 - 18:04
Updated : May 10, 2011 - 18:04
Last Thursday’s Children’s Day was made special for more than 50 children from the Sunhansaram Orphanage when they were treated to a Gaelic football coaching clinic and exhibition match at Yongin Stadium.

Gaelic football team The Seoul Gaels were invited to be a part of Hankuk University of Foreign Studies’ Children’s Day program. 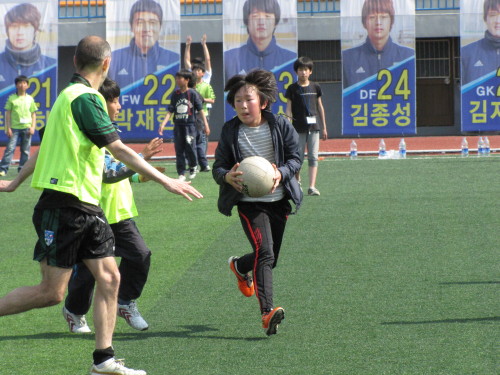 The Gaels kicked off proceedings by putting on a high-paced Gaelic football exhibition game for their young audience. After the game, youngsters rushed onto the field for a Gaelic football coaching clinic where they were shown how to hand-pass, kick and “solo” a football. Equipped with these skills and knowledge of some basic Gaelic football rules, teams were chosen for a match.

“I was surprised at how quickly these kids grasped the game. Instruction was mostly in English, but they showed a natural ability and flare, and they soon became very competitive,” said Trolan.

“Seoul Gaels’ goal has always been to promote a Gaelic football culture in Korea in much the same way as it has been established in Singapore and Hong Kong,” he said. “Today’s involvement showed just how successful Gaelic football can be in building bridges between foreign and Korean communities.”

According to Seoul Gaels PR woman Helen Cook, HUFS students, who were involved in the Children’s Day event, have expressed an eagerness to participate in the organization of the Asia Gaelic Football Games (AGG) to be held in Seoul in October. She believes this is a direct result of the Children’s Day session.

The AGG will welcome more than 50 teams from 15 countries to Seoul. As three-time winners of the AGG, The Seoul Gaels will be hosting the event.