PyeongChang, like all cities bidding to host the 2018 Winter Olympics, is to participate in an official technical briefing at the organization’s headquarters from May 18-19. Lee is one of the IOC’s 110 members.

Lee was escorted by his son Lee Jae-yong, a president at the company, and Samsung executives including Kim Soon-taek, head of corporate strategy office and the flagship unit’s vice chairman Choi Gee-sung, before getting on the plane with his wife Hong Ra-hee to Switzerland’s fifth-largest city. 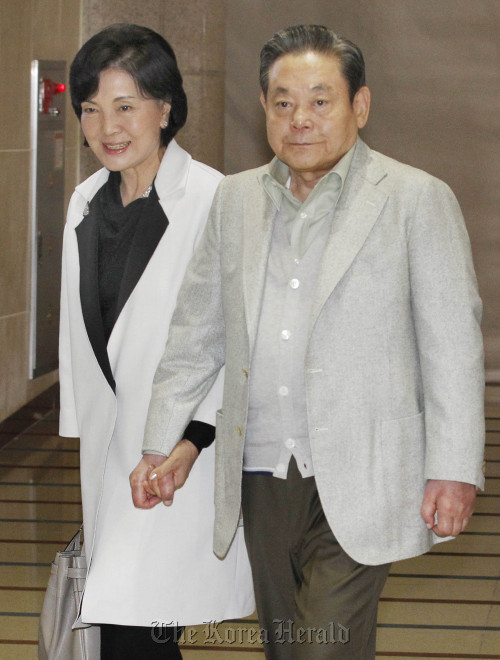 Samsung Electronics chairman and International Olympic Committee member Lee Kun-hee and his wife leave Seoul for Lausanne, Switzerland, on Tuesday, to participate in an IOC technical meeting. (Lee Sang-sub/The Korea Herald)
Lee did not respond to any reporters’ questions before departing from Gimpo Airport.

In Switzerland, he will attend the two-day briefing, according to a Samsung spokesperson.

Lee also plans to participate in the IOC session, which takes place July 6-9 in Durban, South Africa, that decides the final host of the 2018 Winter Olympics, she said.

On another front, Samsung’s vice chairman Choi said there is no need to be concerned about a number of matters involving Samsung ― Elpida’s developing and producing of dynamic random access memory, countersuit raised against Apple Inc. and Intel’s progress on developing 3-D semiconductor chips.

“Those who are worried will say we lack consciousness of a crisis if we say we’re confident, but it seems there’s not much to be concerned about the issues surrounding Apple, Elpida and Intel,” he said.

Choi then left for a business trip to Brazil with Yoon Boo-keun, chief of the company’s visual display business and mobile business president Shin Jong-kyun.