The Asian Champions League has been going well for South Korean teams again this year. In 2010, all four of the nation’s representatives reached the last eight. That is unlikely this time, but there is nothing wrong with that ― such an achievement is unprecedented in Asia.

Still, as the group stage of the 32 team competition, made up eight groups of four, draws to an end this week, three K-League clubs, FC Seoul, Suwon Bluewings and Jeonbuk Motors, have progressed to the round of 16. Only Jeju United have yet to do so and it isn’t looking good for the islanders who sit in third place in their group. Only the top two progress to the next stage.

It is Jeju’s first appearance in the competition and the 2010 K-League runners-up got off to a bad start, losing at home to China’s Tianjin Teda. United recovered to win 2-1 at Melbourne Victory and then defeat Gamba Osaka at home. That revival has been ended by defeats in Japan and then the Chinese port city. That win sent Tianjin through to the next round, the other three teams are fighting for the second spot.

On Wednesday, Melbourne visits the island off the southern coast in a slightly worse position than the Koreans. Both teams must win. If Jeju do so and then Gamba fails to defeat Tianjin then Jeju will go to the second round. If Melbourne, bottom of the group wins, only a Chinese victory in Japan will be enough. 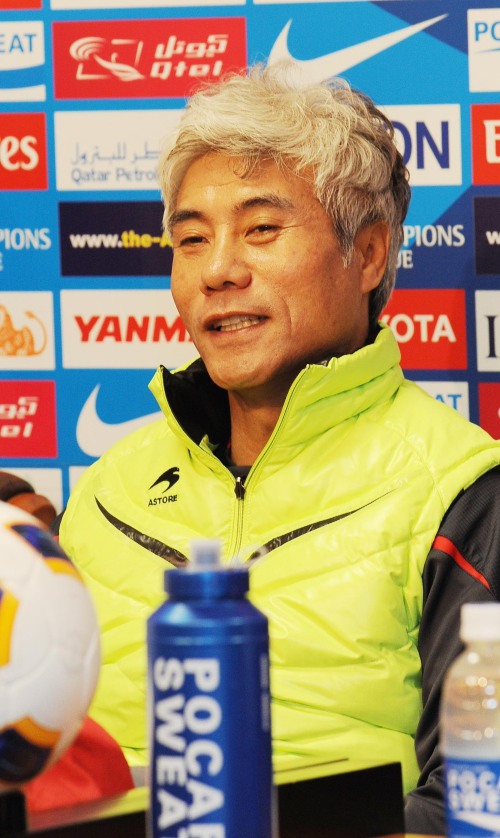 Jeju head coach Park Kyong-hoon (Yonhap News)
It is not complex. Jeju has to win. If it does, then all eyes will be on what happens in Osaka.

The odds favor Jeju to perform the first half of the equation. The K-League team outclassed Melbourne in Australia in March to come-from-behind to win 2-1 but the Australians have managed to get their act together since then, while Jeju hasn’t looked quite so solid.

Koo Ja-cheol hasn’t been replaced. The midfielder, who contributed five goals and 12 assists in 2010, is now in Germany with VfL Wolfsburg and the other star player of last season, Kim Eun-jung has not been anything like as effective. The veteran striker scored 17 in 34 games last season but only scored his first of 2011 on Sunday ― nine matches into the season.

One thing is for sure: Both teams are going to approach the game in an aggressive way.

“The luck hasn’t been with us in the Champions League,” said Melbourne midfielder Grant Brebner. “It’s going to be tough (against Jeju because) we can’t have a draw. It’s going to be a good test this game. Jeju have to win as well so it’s going to be a big match and I’m pretty confident we can get a good victory over there. Hopefully, luck will be on our side.”

All will be saying the same thing about Jeju striker Shin Yong-rok. The talented goal-getter collapsed on the field on Sunday against Daegu FC and has yet to regain consciousness. All K-League fans and everybody connected with Jeju United are praying he recovers.

The other three teams involved may already have a place in the last 16 settled but that doesn’t mean there is nothing to play for. The second round is a one-off game that provides access to the two-leg quarterfinals. The team that wins the group gets home advantage.

Jeonbuk Motors is guaranteed to have that but FC Seoul and Suwon Bluewings have work to do. Suwon is currently top of its group but only above Japan’s Kashima Antlers on goal difference. The Korean team travels to bottom club Shanghai Shenhua needing to ensure that it matches whatever Kashima does at home to Sydney FC. If Kashima wins 1-0 then a one-goal victory for Suwon will be enough.

Seoul has less chance and is second behind Nagoya Grampus. If the Japanese team fails to win at the UAE home of Al Ain then Seoul can go top by winning at Hangzhou in China.

If Suwon does finish first and Seoul second (or vice-versa) then the K-League’s bitterest rivals will meet in the next round of the Asian Champions League. “Our players would have a strong will to win that game,” said Choi. “If we played Suwon then we absolutely could not lose and we could get a good result.”

Now is not the time to think about that but it would be quite a night. First though, it remains to be seen if Jeju can complete another fantastic four for the K-League.