Events marking the start of the 365-day run up to the International Exposition Yeosu Korea 2012 kicked off Tuesday with a concert and celebrations in Yeosu, South Jeolla Province.

The three-month expo will be held at the southern port city from May 12, 2012 until Aug. 12. The upcoming expo is the second international exposition held in Korea, and will be held under the theme “Living Ocean and Coast.” 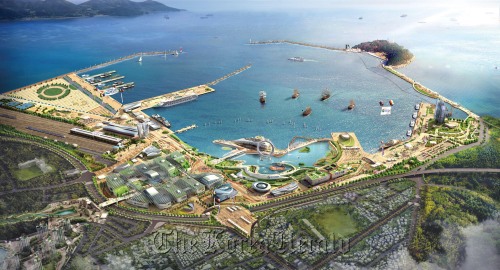 The rendering of a new Yeosu port in South Jeolla Province, where the Expo will be held. (Yeosu City)
Korea’s first international exposition was held in Daejeon in 1993.

Tuesday’s event began with remarks from government and expo officials including South Jeolla Province Gov. Park Joon-yung and chief of the Organizing committee for Expo 2012 Yeosu Korea Kang Dong-suk, followed by a concert that will be broadcast on Sunday. On Wednesday, the organizing committee will appoint singer IU as promotional ambassador for the event, and hold a song contest for children from the Yeosu area.

From Thursday until Sunday, the organizers of the expo will hold events to promote the upcoming exposition at key locations in Seoul.

Officials from the organizing committee said that it would step up promotional efforts in the run up to the event through programs designed in accordance with the expo’s emphasis on experience and participation.

In addition to promotional events, Prime Minister Kim Hwang-sik will chair the 10th committee meeting on governmental support of the Yeosu Expo at the Yeosu City Hall on Thursday. At the meeting central and regional government officials will review the proposal to change plans for installing facilities for the expo and their use after the event.

The Yeosu Expo’s organizing committee is also holding an international symposium in collaboration with the Korea Maritime Institute. Scheduled to be held in Seoul, the symposium will handle maritime issues including developing marine energy sources.