The automaker saw its Genesis sedan capture more than 10 percent of the U.S. market in the mid-luxury class for the first time last month.

According to Autodata Corp., sales of the Genesis came to 2,648 units in April, up 16.9 percent from a year earlier. Its market share posted 11.6 percent.

While Genesis ranked fourth in sales and recorded a market share increase from 9.9 percent a year before, Lexus ES saw its share fall from 17.1 percent to 14 percent over the corresponding period. 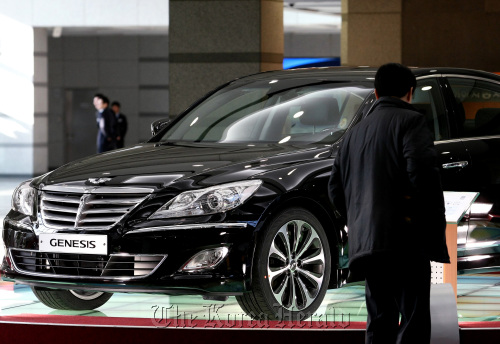 A man looks over a Hyundai Motor Co. Genesis luxury sedan in a showroom at the company’s headquarters in Seoul. (Bloomberg)
The two sedans are expected to closely vie for third place in the coming months while the Mercedes-Benz E series and BMW 5 series hold the No. 1 and No. 2 positions.

In terms of accumulated market share between January and April, the Mercedes-Benz E series topped the list with 23.7 percent, followed by the BMW 5 series with 19.4 percent, Lexus ES with 14 percent and Genesis with 11.1 percent.

The U.S. mid-luxury class market is known as an arena of keen competition among major global automakers.

The Cadillac DTS grabbed 7.4 percent of the market, followed by the Infiniti M with 4.8 percent and Audi A6 with 3 percent during the January-April period.

Hyundai Motor launched the Genesis in the North American market in June 2008.

The automaker has also been successful in the premium-luxury sedan market as the Equus’ market share surpassed 5 percent between January and April.

The accumulated share of the Equus reached 5.4 percent during the four months with sales of 950 units.

Considering that Hyundai Motor only began selling the Equus in December, there is a possibility that its share could be equivalent to that of the Genesis in one or two years.

“Sales of the Genesis and Equus go beyond our expectations,” a company spokesman said. “We forecast sales of the sedans to reach more than 30,000 and 3,000 units, respectively, this year in the U.S.”

Hyundai’s Sonata and Accent posted 11.9 and 12.9 percent in their respective classes over the cited period. Among sport utility vehicles, the share of the Tucson, Santa Fe and Veracruz stayed below 5 percent.