As “The Oprah Winfrey Show’’ ends, with 16 episodes left as of May 4, her millions of fans around the globe are waiting to see how she will close out a show that engineered a media empire.

Winfrey’s producers plan a star-studded, double taping on May 17 at Chicago’s United Center. The shows will air May 23 and 24, as Winfrey’s second and third-to-last episodes.

The show is dubbed “Surprise Oprah! A Farewell Spectacular.’’ Winfrey hates surprises, producers say, but she has agreed to this event.

But for fans, questions remain.

Who will be at the United Center that Tuesday night? Who will be beamed in by satellite or deliver a taped farewell message?

Winfrey has a stable of celebrity friends who have appeared repeatedly on her talk show. John Travolta. Tom Cruise and Katie Holmes. Jennifer Aniston. Chris Rock.

Could the Black Eyed Peas perform, as they did when Winfrey shut down Chicago’s Michigan Avenue in 2009?

Then there are the presidents and world leaders: Bill Clinton; George W. Bush; Nelson Mandela. President Barack Obama and first lady Michelle Obama have already appeared on a special show that aired Monday.

And Winfrey has other well-respected friends who could be possibilities: Maya Angelou; Sidney Poitier; Barbara Walters. Not to mention Winfrey’s proteges, who she fostered to their own television stardom, such as Mehmet Oz, Phil McGraw and Nate Berkus. 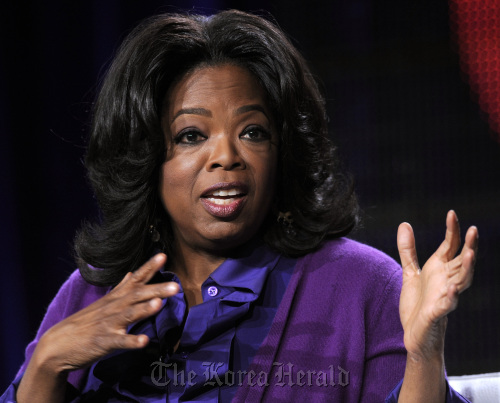 Oprah Winfrey (AP-Yonhap News)
Kelly Brittain, a 41-year-old mother of three and assistant professor from East Lansing, Mich., has watched Winfrey for decades. In 2000, she attended a taping on phenomenal graduates. Audience members received mortarboard caps; Brittain stores hers in a keepsake box.

“Somehow I know the producers, they’re going to absolutely `wow’ her,’’ Brittain said.

It has the makings for a major cultural event, said Bill Carroll, expert on the daytime television market for Katz Television in New York.

Harpo Productions received more than 154,000 ticket requests for seats to the event _ the United Center’s capacity is about 20,000. There was a lottery for seats.

“For a national, international audience that’s a small number,’’ said Marianne Jennings, an Arizona State University professor who has researched the ticket industry for decades.

Tickets for the Chicago taping could be even more coveted than seats for the Super Bowl or World Series, she said.

“It’s a once-in-a-lifetime event,’’ Jennings said. “There’s something that grips us about that. It’s something about being there with the crowd, being there for history.’’

And Winfrey’s talk show history is anything but small: 30,000 guests, 4,500 episodes and 283 items named her “favorite things’’ in the famous annual giveaway.

But there’s still a bigger question: What will Winfrey do for the May 25 finale? Harpo isn’t talking, nor is the talk show queen.

Experts suggest the Chicago celebrity blowout means the finale will be in Winfrey’s studio for a quieter, more intimate occasion, maybe even without an audience.

“If I were a longtime viewer, I’d want the show to end in a place where I’m most comfortable with her and most familiar,’’ said Janice Peck, author of “The Age of Oprah: Cultural Icon for the Neoliberal Era.’’

Viewers are looking for a heartfelt connection after having daily interaction with Winfrey for 25 years, Peck said.