[ The Korea Herald – Send E-mail ]
Park confident ahead of worlds
By 로컬편집기사
Published : May 9, 2011 - 18:28
Updated : May 9, 2011 - 19:30
Korean swimming star Park Tae-hwan has revealed his confidence for the upcoming 2011 world championships, despite his disappointing results two years ago.

Since the 2010 Asian Games, Park has trained with Australian coach Michael Bohl in Brisbane, Australia. He returned home Sunday for a weeklong break before gearing up for the world championships in Shanghai in July.

Fresh from his overseas training, Park said on Monday that he was “excited” and looking forward to returning to the championships.

“Every day I trained hard, and I’m happy with the pace so far,” Park said during a press conference at Lotte Hotel in Sogong-dong, central Seoul. 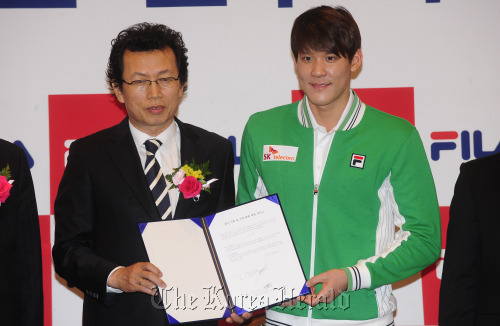 Park, who won gold in the 400-meter freestyle at the 2008 Beijing Olympics, said he felt everything seemed to go right for the world championships.

“I’m more excited than worried. Especially, my 400-meter record has improved over the last month and I think I’m on my way to reaching my target,” Park said with a big smile on his sun-tanned face.

The Korean swimming star had a disappointing season in 2009, failing to make it to any of the 200, 400 or 1,500 finals at the world championships in Rome.

But last year, he returned to form, claiming seven medals, including three golds at the Asian Games.

Park, 22, is at his peak now and this summer’s competition could be another victorious stage for him.

The Olympic medalist said that he was aiming for a new record in the 400 in July.

Park also indicated that he feels no pressure from his competitors, including Chinese rival Sun Yang, who recently beat Park’s record time of 3:41.53 in the 400 freestyle.

“I don’t pay too much attention to other athletes. I’m focused on my training, and I feel really good about the upcoming championships,” Park said.

Park is scheduled to take another overseas training session in Australia next week, and also in Mexico later this month along with the Australian national team. He will compete in the U.S. Swimming Grand Prix in Santa Clara in June before heading to Shanghai.

“My first goal was to win an Olympic medal, and I’ve already achieved it. Now, I’m aiming to set a new world record,” he said.