[ The Korea Herald – Send E-mail ]
The Radiators put up last show at New Orleans’ jazz fest
By 김후란
Published : May 9, 2011 - 18:40
Updated : May 9, 2011 - 18:40
NEW ORLEANS (AP) ― On the final day of this year’s New Orleans Jazz & Heritage Festival, fans camped out early Sunday to get a great spot to hear the closing day set of The Radiators ― one of the city’s funkiest blues rock bands ― who have been closing the fest along with the Neville Brothers for years.

Festival producer Quint Davis said that kind of longevity is worth celebrating.

“I’ve always been around them and a part of their journey,” he said. “They’re an amazing phenomenon. It’s equally rare to have the same five guys playing in a band for this long and still have the unique chemistry that allows you to travel on what Ed calls ‘a spirit ride.’”

Davis introduced the band Sunday evening, saying Professor Longhair and the Nevilles were the only other acts to regularly close the fest.

“We at jazz fest take our traditions as seriously as those in New Orleans,” Davis said. “I thank them for giving us the times of our lives.”

Cajun fiddler Michael Doucet of BeauSoleil made a guest appearance during the farewell set as did guitarist Warren Haynes of the Allman Brothers Band and Gov’t Mule. The group walked fans through all their hits including “Red Dress,” “Never Let Your Fire Go Out,” “Ride Me High” and “Sunshine Down.”

The Radiators are calling it quits this year, with final performances set June 9-11 at New Orleans’ famed music club Tipitinas. 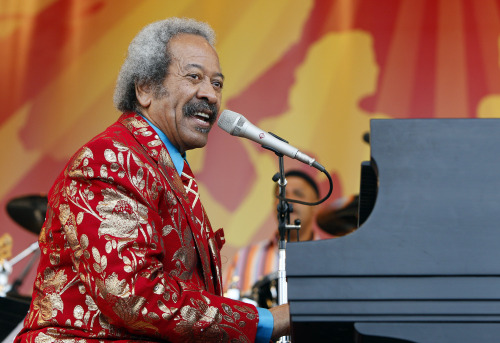 Allen Toussaint performs at the New Orleans Jazz and Heritage Festival on Friday. (AP-Yonhap News)
At the festival, fans from far and wide expressed thanks for the opportunity to experience their music and regret that the music was coming to an end.

“They’re what New Orleans music should be and is about,” said Sean Sorenberger, of Monterey, Calif. “I thank them for educating me about New Orleans singers like Eddie Bo and Professor Longhair and bringing that sound across the country where you don’t always get to hear bands like them.”

“I love their energy and songwriting and their relationship with their fans,” said Stacey Erdmann, of San Francisco. “I raised my daughter on this music.”

Scanlon said that kind of fan loyalty is what he will miss most.

“I think that’s our legacy,” he said in an interview before the show. “We’ve been a catalyst for this amazing community of fans, who have formed around the country. These people have formed friendships that will last beyond us. These communities that have formed as a result of our music really shows that music can bring people together for more than just a gig.”

Sorenberger said he planned to be at Tipitinas for the band’s final shows. “It’s ending so you’ve got to get it while you can,” he said.

Though disappointed that the band was breaking up, he said he looked at it as inevitable.

“It’s an end of an era for a lot of people. A lot of fans were teenagers when they first discovered The Radiators. Now they’re grown, they have kids and mortgages. But that’s the evolution of life.”

“There’s some sadness,” said Erdmann, “but I wish them all the luck in the world.”

Malone said he planned to take at least a month off before moving to the next musical stage of his life. What that might include is still a mystery. “Maybe something with my brother, Tommy, a guitarist with the Subdudes,” he said.

Scanlon said one of his side projects ― New Orleans Suspects ― is scheduled to hit the road in July. “The idea of starting at the beginning again is cool and fun,” he said. “Being together 33 years is like a marriage and sometimes you have to work to get that spark back. But with a new romance, you’re all giddy and it’s fun to have that kind of atmosphere around a new project.”

Early Sunday, thousands who had staked out spots in front of the Gentilly Stage awaiting The Radiators’ performance also enjoyed sets by Playing for Change, Papa Grows Funk and Michael Franti & Spearhead, who blends hip-hop with a variety of styles, including reggae, rock, folk, jazz and rock.

Franti’s high energy show included a special appearance by Amanda Shaw, a young Cajun fiddler who joined him on a version of the Steve Miller Band’s “The Joker” to the delight of fans.

“It was a sweet, sweet opener and they rocked it all the way through,” said Valerie Bressman, of Portland, Oregon, who was hula-hooping on the fringe of the crowd that stretched at least a quarter-mile.

Her husband, Eric, said he loves Franti’s spirit and optimism that shines during his performances.

“He’s a great songwriter and his lyrics really speak to me,” he said.