But the six-day competition, which ended Friday, also dealt a big blow to the host.

Korea has dominated the competition since its establishment in 1973, but this year Iran took the men’s overall title, dethroning Korea for the first time in the contest’s history.

In the men’s under 87kg final on Friday, Iran’s Yousef Karami beat Korea’s Cha Dong-min, the 2008 Beijing Olympic medalist, 8-6 for the gold medal.

Earlier in the men’s under 54kg final, Park Ji-woong also fell to Chutchawal Khawlaor of Thailand and settled for silver. 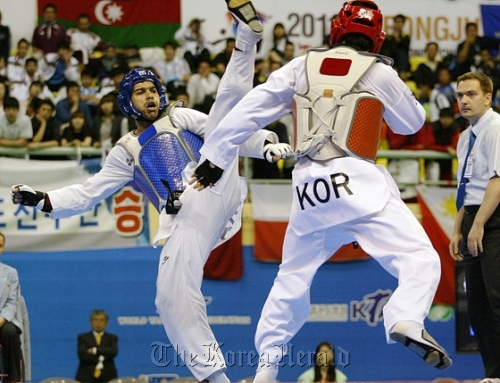 Iran’s Yousef Karami (left) competes against Korea’s Cha Dong-min in the men’s under-87kg final of the World Taekwondo Championships in Gyeongju, North Gyeongsang Province, Friday. (WTF)
Although Korea had some consolation ― it secured the women’s overall title with one gold medal, two silvers and three bronzes ― the overall performance of the Korean side certainly disappointed compared to their previous efforts.

At the world championships in Copenhagen two years ago, Korea’s men and women together won five golds, two silvers and two bronzes.

Many blame the introduction of a new electronic scoring system for Korea’s failure. Under the new scoring system, which was introduced in 2009, the athletes must wear electronic protectors. Wearing heavy electronic armor can be a disadvantage for Korean athletes, who mostly favor speed over power.

However, the World Taekwondo Federation, the sport’s governing body, insists that it will continue to use electronic protectors to help the judges and run the games fairly.

“In order to survive the new trend, Korean athletes should quickly adopt to the electronic armor,” a local expert said.

Some observers said, however, that Korea’s decline is actually a positive sign.

After decades of dominance by Korean athletes, the martial art has finally evolved into an international sport and this year’s tournament was clear evidence of that.

In fact, in recent years, many countries, including Iran, China, Italy and Thailand employed Korean taekwondo coaches to foster their teams. The Korean influence has therefore helped boost the sport’s popularity across the world.

“We are growing in numbers and reaching into areas that other sports have yet to explore,” he said.