An injury to Animal Kingdom’s regular rider, Robby Albarado, cleared the way for Velazquez to pick up the mount on the 20-1 long shot. Once he took the reins Saturday, he rode his good luck all the way to the winner’s circle.

The last three years, the New York-based jockey came to Churchill Downs with a colt considered a leading contender, only to have it withdrawn.

This time, he was supposed to ride early second choice Uncle Mo before the colt was scratched due to a lingering stomach problem. Then Albarado broke his nose when he was thrown off his horse and kicked in the face before a race three days ago.

And the rest, as they say, is history.

“It’s words that you can’t describe,” Velazquez said. “But I do really feel really bad for Robby. I hope he’s winning the Derby with me here. I know he got hurt, so this is for both of us, buddy. I know you’re not on it, but I know you’re with me.”

He promised to take care of Albarado, although he didn’t specify how.

Trainer Graham Motion got lucky, too.

His top Derby horse, Wood Memorial winner Toby’s Corner, never even made it to Louisville. He had a leg injury and never left Motion’s barn in Maryland.

“Somebody said, ‘Are you surprised to win with a second-tier horse?”’ Motion said. “I said, ‘I’m not sure we would categorize him as a second-tier horse. He’s been an extraordinary horse to train. I was so impressed with how he handled everything.” 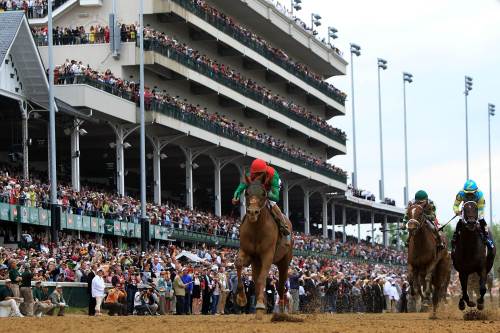 Dialed In went off as the 5-1 favorite for two-time Derby-winning trainer Nick Zito, but finished eighth.

Mucho Macho Man’s finish for Kathy Ritvo tied her for second-best result by a female trainer in the 137-year-old race. Shelley Riley saddled Casual Lies to a second-place finish in 1992.

Rosie Napravnik was ninth aboard 8-1 second choice Pants On Fire in her bid to become the first female jockey to win.

Animal Kingdom is owned by Team Valor International, a partnership syndicate headed by Barry Irwin, a former writer for the Daily Racing Form, the industry’s bible.

Irwin decided to switch riders when Albarado took Friday off to recuperate.

“It was a tough call because I really like Robby. He’s won a lot of races for us, but we got 20 partners in this horse,” Irwin said. “We got a large investment and I had to do what I thought was best for the partnership.”

Like Velazquez, Irvin said he would make it up to Albarado.

Albarado, who won a $345,600 stakes race on the Derby undercard, found out Friday he was off Animal Kingdom.

“I’m not happy,” he said after the race. “Barry Irwin decided he didn’t think I was fit to ride; he didn’t know my status or situation. This just wasn’t my time today.”

Instead, it was Velazquez’s moment after going 0-for-12 in previous Derby tries.

Animal Kingdom won the Spiral Stakes on the synthetic surface at Turfway Park in his previous start. And though this was his first race on dirt, the winner had an easy trip, with Velazquez doing a masterful job despite being unfamiliar with the horse. They avoided trouble in the 19-horse field while running in the middle of the pack most of the way.

Animal Kingdom swept past the leaders on the final turn and came flying home.

“I didn’t have to do very much,” Velazquez said. “He was going well the whole way around, so he gave me a lot of confidence to be where I was and when I asked him to do something he was there for me. A good horse gets you out of trouble.”

Arkansas Derby winner Archarcharch, who started from the inside rail, was vanned off the track with a leg injury and will need surgery for a non-life-threatening fracture.