LAS VEGAS (AP)—Manny Pacquiao caught Shane Mosley early, then chased him the rest of the night. Not much more he could do against an aging fighter who seemed only to want to survive.

Pacquiao won a lopsided 12-round decision Saturday night, retaining his version of the welterweight title in a fight that was roundly booed over the late rounds because Mosley refused to trade punches. He won every round on two ringside scorecards in extending the remarkable run that has made him the most exciting fighter in the sport. 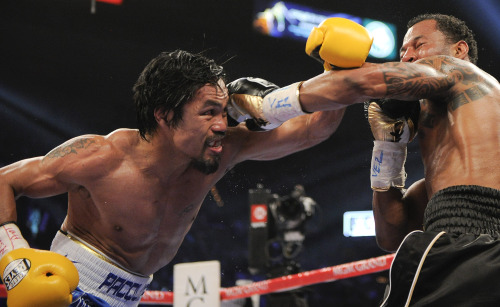 Manny Pacquiao (left) throws a punch against Shane Mosley in the fourth round during a WBO welterweight title bout, Saturday. (AP-Yonhap News)

Pacquiao knocked Mosley down with a left hook in the third round, a punch that seemed to sap Mosley’s willingness to engage. Pacquiao ran after Mosley the rest of the fight, but the former champion who has never been stopped in 18 years in the ring managed to stay away enough to finish the 12th round upright.

For Mosley, the fight was strikingly similar to his bout a year ago against Floyd Mayweather Jr.—except this time he didn’t even land a big punch like he did early on against Mayweather. His biggest moment on this night came when referee Kenny Bayless mistakenly ruled that Mosley knocked Pacquiao down in the 10th round when he didn’t even hit him with a punch.

The knockout that wasn’t seemed to spur Pacquiao on as he went after Mosley the rest of the round and again in the 11th. By then the crowd was cheering “Knock him out, knock him out” but Pacquiao—bothered by a cramp in his left leg since the fourth round—didn’t have enough to finish him off.

“It wasn’t my best performance,” Pacquiao had. “I did my best. I did not expect this result.”

Mosley said he thought he did a good job despite losing round after round, and wouldn’t blame his bad performance on the fact he is 39 and has been fighting ever since he was a child.

“I fought the best fighter in the world,” Mosley said. “He has exceptional power, power that I’ve never been hit like this before.”

Mosley was tentative from the opening bell, moving backward and seemingly unwilling to engage Pacquiao. With good reason, because a left hook by Pacquiao found its mark with a minute left in the third round and put Mosley on the canvas for only the third time in his 18-year pro career.

Pacquiao pressed the fight most of the night, but he too seemed unwilling to take many chances, which trainer Freddie Roach said was because of the muscle cramp that his corner tried to massage between rounds.

“He had no leverage to move after that,” Roach said. “It was a very gutty performance in my mind.”

Perhaps, but the sellout crowd of 16,412 came to see more, and booed repeatedly in the late rounds. The boos were directed at Mosley, not Pacquiao, but it was clear early on this would not be a classic fight.

Mosley fought as if trying to protect his legacy of having never been knocked out and, if that was his strategy, it succeeded. But it made for a lackluster fight and did nothing to burnish the legacy that the Filipino champion has built with 14 straight wins over the last six years—including some over some of the biggest names in the game.

Pacquiao made a minimum of $20 million for the fight, while Mosley was guaranteed $5 million.