Chris Hemsworth knows. Once he was tapped to play the title character in “Thor,” the Australian actor threw himself into a body-building regimen that would transform his solid but unspectacular physique into one worthy of a Marvel superhero.

“I don’t naturally have the kind of weight Thor has,” Hemsworth said. “I ate tons of protein. Worked out a lot. I’ve always been pretty active, but nothing on this scale.

“It’s deceptive. It’s such a slow process that when you look in the mirror every day you don’t realize the subtle changes. Everyone else around me was saying, ‘Oh, my God, you’re huge.’ And I’m looking in the mirror and thinking, ‘It’s not working. I’ve got to eat more!’”

In fact, Hemsworth said, he went a bit too far.

“I put on too much muscle. A few days before shooting was to begin we realized none of my costumes fit. I had to crash diet just to squeeze into them.”

Hemsworth, 27, said that playing a comic-book hero has special challenges. Foremost among them is ensuring that Thor’s human side is as compelling as the action and special effects.

“Our big focus was on how to make Thor relatable. These are gods speaking to each other, but on the other hand, these are fathers and sons, brothers. We can all relate to that.

“So it was all about humanizing the gods and finding the truth in their lives. And once you find it, to not drift away into all the big colorful things a movie like this can become.” 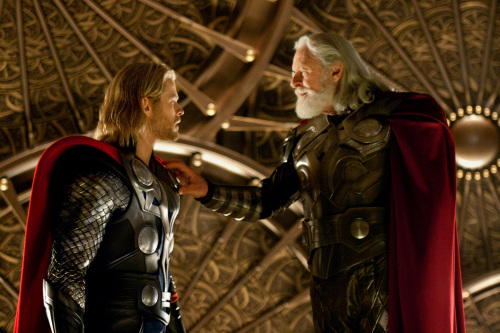 Chris Hemsworth (left) stars as Thor and Anthony Hopkins as Odin in “Thor,” from Paramount Pictures and Marvell Entertainment. (Marvel Studios/MCT)
The story finds the arrogant Thor banished from Asgard by his father, Odin (Anthony Hopkins). Sent to Earth, he must create a new life surrounded by mortals.

“Marvel is such a sleek machine that we knew the special-effects side was already taken care of. Ken had to be aware of that side of the production, but he didn’t have to dwell on it. He could work on grounding the film.”

While he’s best known for filming Shakespeare classics like “Henry V,” “Hamlet” and “Much Ado About Nothing,” Branagh grew up reading The Mighty Thor comic books, Hemsworth said.

“So, really, he became the perfect blend of fan and careful filmmaker. He knows story and character development. He certainly knows how to assemble a production. With a film like this it’s too easy to get lost in the effects, but Ken was all about story, character, the relationships. His vision of Thor was that of a man looking for his place in life, and he made sure we all concentrated on that.”

A native of Melbourne, Hemsworth grew up in a non-show biz family. But clearly there is some sort of thespian gene in the Hemsworth blood line. Both of his brothers are actors. Liam was in the Nicolas Cage sleeper hit “Knowing,” appeared in “The Last Song” (and dated co-star Miley Cyrus) and has a big role in next year’s much-anticipated “The Hunger Games.” Luke is a familiar face on Australian television dramas.

“Neither of our parents are actors or in the business. For whatever reason, we boys developed a love for acting. We grew up loving storytelling and movies, reading ‘The Lord of the Rings’ as kids and sharing a real sense of adventure. That has followed us into our adult lives.”

Hemsworth describes his siblings as competitive but supportive.

“We really back each other; it’s sort of a team effort. This business has lots of ups and downs, and having close friends really helps.”

For Hemsworth, it has been mostly ups. He played Captain Kirk’s father, George, in J.J. Abrams’ 2009 “Star Trek” reboot. He has already completed the thriller “The Cabin in the Woods” (based on a Joss Whedon script) and a remake of the Cold War action pic “Red Dawn.”

Last week he once again suited up as Thor as the follow-up, “The Avengers,” went before the cameras.

“I had the perfect introduction with ‘Star Trek’ ― a small role in a big, successful movie. There really wasn’t much pressure there, and it got me ready for ‘Thor.’ I’m a bit nervous, sure, but my excitement overrides my trepidation.”