In the initial vote held in the early afternoon, Hwang won 64 votes out of 159, closely beating his rival An Kyung-ryul, who won 55 votes.

The two front runners were then put to a final vote, in which Hwang won 90 votes out of 159.

Hwang, a fourth-term lawmaker and former judge, is reputed for his non-factional political stance and profound legal insights, and is expected to win the support of those who wish to renew the party and overturn the current power games. 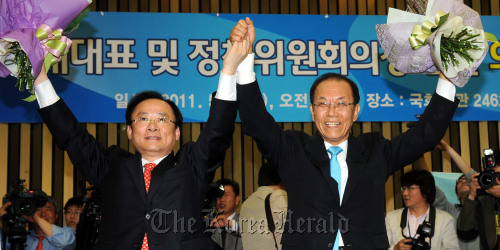 Rep. Hwang Woo-yea (right) and Rep. Lee Ju-young celebrate their election as floor leader and policy committee chairman of the ruling Grand National Party, respectively, on Friday. (Park Hyun-koo / The Korea Herald)
The internal election was the first to take place after the last month’s by-election in which the GNP faced a crushing defeat to the opposition camp in most of the aspired areas.

The race came amid the factional collisions within the party, especially between the leading pro-Lee Myung-bak group and the independent group.

Third-term lawmakers An Kyung-ryul and Lee Byung-suk also entered candidacy, respectively in partnership with policy committee chairman candidate Chin Young and Park Jin. Both An and Lee are considered pro-Lee members within the party.

An, who is a close aide to Special Affairs Minister Lee Jae-oh, is known for his solid personal connections within the conservative camp.

His competitor Lee is said to be more closely acquainted to Lee Sang-deuk, sixth-term lawmaker and older brother of President Lee Myung-bak. The Pohang-based lawmaker is largely supported by his colleagues from the Gyeongsang area.

A party’s floor leader is to act as an inter-party communication channel and is largely considered as the No. 2 leader within the party.

The results of the floor leader election will also greatly affect the national party convention scheduled for this coming July and the selection of the emergency panel chairman next week.

The party’s Supreme Council, shortly after the by-elections, resolved to step down and give way to a temporary emergency committee until a new leadership was established.

It has been the general understanding within the party that fundamental reforms are needed in order to regain the public trust, especially with the general and presidential elections coming up next year.

Meanwhile, in the main opposition Democratic Party, Reps. Lew Seon-ho, Kang Bong-kyun and Kim Jin-pyo are readying themselves for the floor leader vote next Friday.