That’s the approximate time it takes to run the Indianapolis 500 in this formerly ho-hum-hamlet-turned-real-city. It’s this last bit that’s surprising, because for some time, it wasn’t like that.

But if you’ve been sleeping on Indy, know that it’s now pretty close to perfect as well as being a perfect mass of incongruities. Downtown, you can stroll the Riverwalk, sleep at the Omni, shop at Nordstrom and dine at Ruth’s Chris. Near the track you can hock your gold, buy a gun and use the remaining bucks at a gentleman’s club, all in the same less-than-a-mile walk.

And yes, you read right. We said Indianapolis was perfect. Because if like most Americans you come from a small- to average-size metropolis, Indy is a perfectly sized, bustling jewel with plenty to do, including museums, upscale dining, an outdoor sculpture garden and the symphony. Restaurants hang out the “Welcome, race fans” banners, hotel prices skyrocket and traffic jams ensue. Same as it ever was. 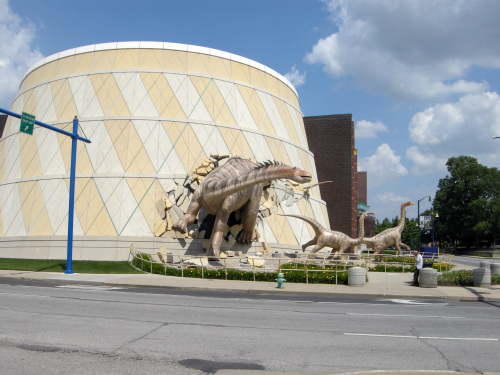 The Indianapolis Children’s Museum generates excitement both inside and out with its Dinosphere. Inside, kids can watch fossils being prepared and talk to archaeologists. (Chicago Tribune/MCT)
Be reassured by this, because as spectacles go, the Fi-hunnert ― even this year’s centennial ― ain’t what it used to be, even as it is what it always was.

The 500 hasn’t been The Five Hundred since 1995, when two groups of rich men went to war and divided one very successful open-wheel (no fenders) racing series into two un-successful ones. The two sides have since kissed and made up and now are trying to return the Indy 500 to its status as the Greatest Spectacle in Racing. The spectacle is intact and amazing for one simple reason: 227 mph.

Indy is all about sensation. The air ripples as the cars come out of Turn 3. It’s a shock wave of anticipation by the time they’re rolling out of Turn 4, and the din is deafening. The pack blasts through in a multicolored blur in what seems like about a second, leaving you with that smell of flash-burned fuels and a desire for more. There’s nothing like it.

These cars are less than half the weight of a Toyota Camry and hurtle around an oval at speeds higher than a passenger jet requires for takeoff, often within a yard of a wall. It all reduces you to an awestruck “Whoa!”

It started in 1911, when a 2-year-old track hosted the first 500. The average speed was almost 75 mph, and the 200 laps took 6 hours and 42 minutes. Today, the cars could complete the race distance in about a third of the time, if not for the caution flags and crashes.

You should make a weekend of it because of Carb Day, featuring the Indy Lights (little brothers of the Indy cars) competing in the Freedom 100. This is preceded by Indy Car practice, an opportunity to get your first taste of the feel and the sound, and followed by a concert (Staind, Papa Roach).

Saturday’s high point is the opportunity to be charmed or amused ― depends on where you come from ― by the IPL Festival parade.

Then it’s Sunday, race day (or Monday in case of rain), where on a piping-hot afternoon you take your seat in the speedway’s metal grandstands and bake like a lobster as you marvel at the wonder of it all. You settle in for the 200 laps of the Indy 500 and realize that at the Indianapolis Motor Speedway, the 500 really is the greatest spectacle in racing. It’s also an event that needs to be experienced, at least once.