[ The Korea Herald – Send E-mail ]
Kim to perform in Seoul this weekend
By Oh Kyu-wook
Published : May 4, 2011 - 18:10
Updated : May 4, 2011 - 19:14
South Korean figure skating star Kim Yu-na has said she is still recovering from her ankle injury, but insisted she would be fully ready before the opening of her ice show this weekend.

“I still have some pain in my ankle, and I’m a little bit worried. But hopefully I’ll be fully ready before the ice show,” she said.

Kim had aimed for claiming her second world title last week at the World Figure Skating Championships in Moscow. But a big mistake on the triple flip during Saturday’s competition cost her the gold medal as Japan’s Miki Ando rallied in the free skate to claim the title. 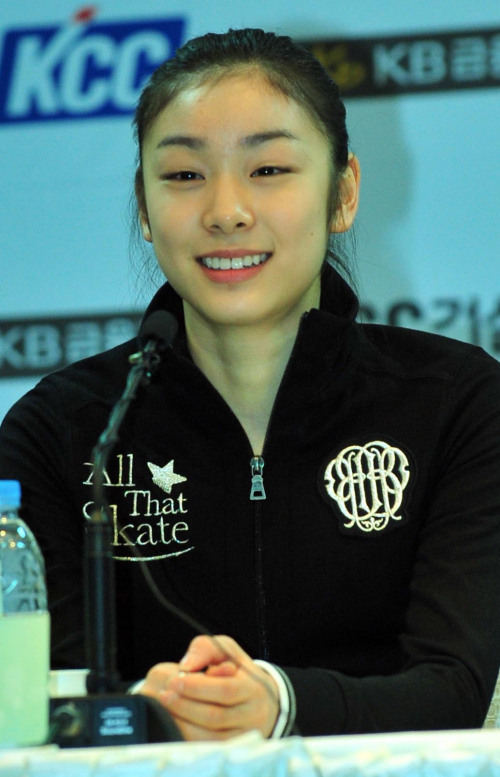 Kim Yu-na takes part in a press conference on Wednesday at Jamsil Indoor Gymnasium in southern Seoul. (Kim Myung-sub/The Korea Herald)
Kim, who skated competitively for the first time in over a year, admitted she had hurt her ankle before her performance on Saturday.

After a bit of a struggle at the World Figure Skating Championships, she is now back home for her annual “All That Skate” ice show.

The 2010 Vancouver Olympic gold medalist is scheduled to host a series of ice shows from Friday to Sunday at Jamsil Indoor Gymnasium in southern Seoul.

Other medalists in the show include the 2006 silver medalist Brian Joubert and the Vancouver Olympics pairs champs Shen Xue and Zao Hongbo of China.

At the show, the 20-year-old Korean figure star will showcase her new short program “Giselle,” for the first time in front of home fans. The ice show will also highlight some of the great hits of well-known pop singers such as Lady Gaga, Whitney Houston and Beyonce.

Kim will skate to Beyonce’s “Fever,” for her new gala program, and Gordeeva will perform to Whitney Houston’s “I Believe in You and Me,” and also “Cinema Italiano,” by Kate Hudson.

The event is being coordinated by Kim’s choreographer David Wilson. Wilson said Wednesday that he is really “excited about” the show.

“I think I’m blessed to have skaters such as Yu-na and Ekaterina together in my program. And I know Korea has one of the best audiences in the world, so I’m really excited,”

“After the World Championship, I thought I was worried about my condition, but I’m now getting better. I’ll be able to be ready on schedule,” Kim said.

All That Skate Ice shows are scheduled on Friday at 8p.m, Saturday at 7p.m and Sunday at 5.30 p.m. Tickets are available at online auction site www.interpark.com or by calling 1544-1555. For more information, visit allthatskate.com.