Founded in 1986, the choir recorded the entire soundtrack of “The Chorus,” nominated for an Academy Award in the Best Foreign Language Film category in 2005, with the song “Look to Your Path” earning a nomination for Best Song. 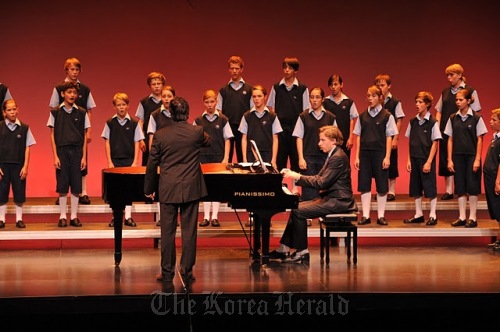 Les Petits Chanteurs de Saint-Marc (SPA Entertainment)
The choir is to start with a recital at the Seoul Arts Center’s Concert Hall on May 13, and then to perform in Gyeongju on May 17, Ulsan on May 18, Busan on May 19 and Yongin on May 21.

Unlike other choirs such as the Vienna Boys’ Choir and Les Petits Chanteurs a la Croix de Bois (the Children’s Choir of the Wooden Cross), which are boys-only, the Saint-Marc choir is comprised of boys and girls, aged 10 to 15.

The film “The Chorus” tells the story of a passionate teacher and a group of choirboys whose lives change through their learning of music.

At the upcoming concert, the choir’s program will cover popular hits from “The Chorus” including “Look to Your Path” and “In Memoriam,” as well as pop songs such as “Michelle” by The Beatles.

Nicolas Porte, who founded the choir, will conduct.