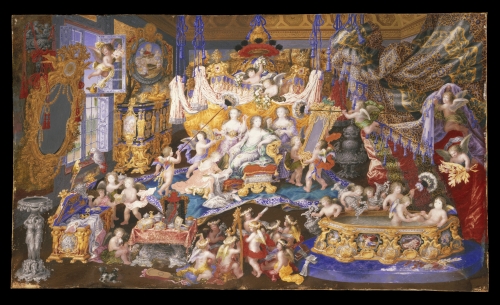 An extended fan leaf thought to depict Madame de Montespan in the Trianon de Porcelaine, France, possibly created in 1674. (Victoria and Albert Museum/V&A Image)
The luxurious treasures enjoyed by the ruling class in Europe during the 17th and 18th centuries have been gathered at the National Museum of Korea in Yongsan-dong, central Seoul.

The exhibits are from the Victoria and Albert Museum collections. They were commissioned or used by members of the powerful and wealthy classes in the European nations of the day, from Russia to Sweden to Spain and Portugal.

The period marked a time when the European countries were expanding their trade globally and building colonies overseas. Expensive and rare materials imported from around the world were frequently used to make luxury goods.

The show is divided into five sections ― “Princely Patronage” which presents key figures from the royal courts Europe between 1600 and 1800; “Power and Glory” which explores how military power was celebrated; “Religious Splendour” which reveals the nature of objects made for worship; “Display in the Interior” which presents furniture, textiles and ceramics made for use in palaces and noble residences; and “Fashion and Personal Adornment” which reveals the care and attention aristocratic men and women took to dress in fashionable style from head to toe.

The exhibition will run through Aug. 28 at the Special Exhibition Hall in the National Museum of Korea in Yongsan-dong, central Seoul. The museum is located near Ichon Subway Station, Line No. 4, Exit 2. For more information, call (02) 2077-9000 or visit www.museum.go.kr.