[ The Korea Herald – Send E-mail ]
Maestro Chung to conduct chorus for PyeongChang bid
By Oh Kyu-wook
Published : May 3, 2011 - 18:53
Updated : May 3, 2011 - 18:53
Maestro Chung Myung-whun will conduct a grand scale chorus assisted by the Seoul Philharmonic Orchestra as a part of efforts to promote PyeongChang’s bid for the 2018 Winter Olympics, the event organizer announced on Tuesday.

World Harmony Chorus, non-profit organization supporting PyeongChang’s bid campaign, announced that a chorus of unprecedented size, conducted by Chung, will perform at 7 p.m. on May 14 at Seoul Plaza. According to the organizer, a leading choir composed of 2,018 members has already been formed and up to 100,000 participants, who will be selected though online application at www.whc.or.kr, will also join the event. 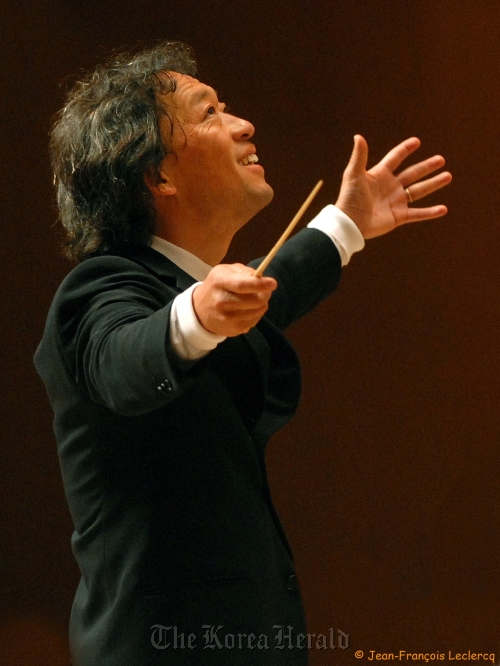 Maestro Chung
The choirs in PyeongChang, Gangwon Province and New York will also sing simultaneously under the lead of Chung through a live-broadcast, the organizer said.

“We have decided to show our passion and enthusiasm for PyeongChang’s bid through the nationwide grand chorus,” World Harmony Chorus noted in a statement.

“We sincerely hope that our voices will travel through the world and touch the hearts of people and the IOC members through international media coverage.”

PyeongChang is bidding against Munich, Germany, and Annecy, France. The host city for the 2018 Winter Games will be selected by secret ballot at the IOC executive board meeting in Durban, South Africa on July 6.