[ The Korea Herald – Send E-mail ]
Samsung chairman coming out of shell?
By 김지현
Published : May 3, 2011 - 19:18
Updated : May 3, 2011 - 19:18
Samsung Electronics Chairman Lee Kun-hee on Tuesday met executives of Samsung financial affiliates to discuss management issues at the company’s headquarters in southern Seoul as a part of his regular visits to the Seocho head offices.

Lee, who had previous not frequented the Seocho headquarters, recently began meeting executives at Samsung affiliates, starting with key aides such as Kim Soon-taek, head of the Samsung’s strategic planning team. 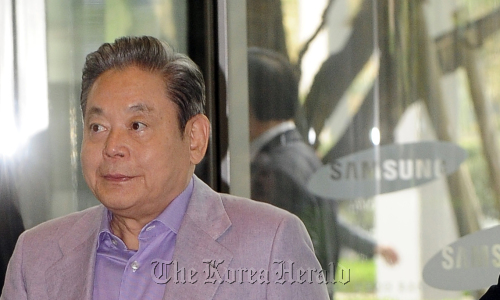 On Tuesday, chiefs of key financial arms such as Samsung Life, Samsung Card and Samsung Securities gathered to report to the company’s owner and top man.

Speculation has it that Lee felt it was time to step up and shield his company from the ever-increasing threats, as indicated by Apple’s recent decision to file lawsuits against Samsung for infringing copyright.

On April 21, Lee had interpreted Apple’s move as an attempt to “hammer in a protruding nail.” He also said it was not just Apple, but companies by and large around the world that were sizing Samsung up.

Another observation was that Lee was out to show everyone ― both in and out of Samsung ― that as the owner, he would make it his personal mission to keep Samsung competitive.

Lee had previously warned that Samsung, despite record-breaking achievements from the electronics arm, was actually facing a crisis and was pressed to create new drivers of growth.

On April 26, the chairman met with executives of Samsung Electronics including Choi Gee-sung,

Two days later, he listened to what executives of other affiliates, such as Samsung SDI, Samsung SDS and Samsung Electromechanics.

Next, the chairman was expected to meet those in charge of Samsung Corp. and some of its chemical affiliates, and possibly Hotel Shilla, run by his eldest daughter Lee Boo-jin.

Lee, however, will no longer keep his usual routine of answering media questions when he comes to the Seocho headquarters, Samsung sources said, since the visits will be regular and he needs to attend to business matters.