A half-century ago this month, a group of military officers led by Army Maj. Gen. Park Chung-hee kicked out a fledgling democratic government which had been grappling with a host of popular demands with little success.

In a six-point “revolutionary pledge,” they tasked themselves with rooting out corruption, pulling the people out of poverty, building a robust economy and laying the groundwork for winning the competition with communist North Korea toward national unification.

Although they promised to return to their proper duties as soon as such tasks were completed, the chapter of modern Korean history that began with their coup went beyond Park’s assassination in 1979 into the late 1980s when pro-democracy protests put an end to the military-backed regime. 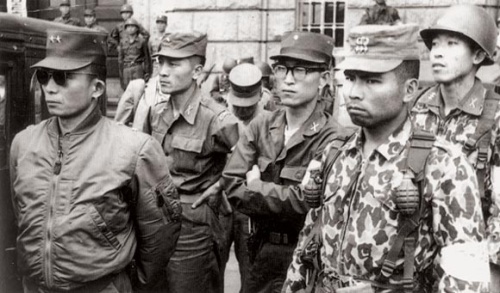 Maj. Gen. Park Chung-hee (left) stands with his lieutenants in front of Seoul City Hall after seizing power in a coup on May 16, 1961. (Korea Herald file photo)
Evaluations of the May 16 coup in 1961 have differed depending on where the analytical focus was placed ― on what it cost the Korean people or on what it contributed to the development of the nation.

Arguments over how to assess it have also been divided along the ideological rift between conservatives and progressives.

The former have insisted that without Park’s leadership, South Korea could not have become what it is now ― a global economic power built from the ruins of the Korean War (1950-53).

The latter have argued that the coup, which came about a year after a student uprising ousted the dictatorial rule of the country’s first President Syngman Rhee, snatched a real opportunity in Korea’s history for economic growth under parliamentary democracy.

A half-century on, debates over the historical meaning of the military coup have recently been heating up, with calls for a more balanced view of the incident gaining ground.

Those seeking to reassess the coup from a wider historical point of view claim it was intertwined with the April 19 students’ uprising to enable the country to reach its current status ― among some 140 states gaining independence since the end of World War II, South Korea is the only nation to achieve both democracy and an advanced economy.

They further argue that the coup and the students’ protest alike were inevitable events in the process of the nation’s modernization, noting that almost all newly independent states that have adopted democracy went through political upheavals inviting military intervention.

What differentiated the May 16 coup from a myriad of military revolts in other developing states were the accomplishments its leaders made in industrializing their country in the aftermath of Japan’s colonial rule and the devastating fratricidal war.

Some scholars say it would have been practically impossible for South Korea to become an industrialized democracy without the economic infrastructure built by the coup leaders being matched with the public aspiration for political freedom and civil liberties.

“I would like to ask whether this industrialized, democratized and globalized Korea could come into existence without the May 16 (coup),” said Song Bok, professor emeritus of sociology at Yonsei University in Seoul.

“In a political sense, it was certainly a military revolt that toppled a legitimate government but unlike coups in other countries, it resulted in the re-creation of the nation through successful industrialization.”

The professor said the success was made possible because Park and other coup leaders had the knowledge, insight and vision needed to drive the modernization of the country.

In 1962 shortly after he took power, Park launched his first five-year economic development plan. Defying foreign experts’ gloomy forecasts and exceeding even the planners’ own projections, South Korea’s gross national product grew by an annual average of 8.3 percent over those five years.

During the second plan, annual GNP growth averaged a whopping 11.4 percent. The figure further proved the efficiency of the export-oriented strategy pushed by Park to subordinate limited resources to the task of industrial development through centralized control.

In the early 1970s, Park kicked off a drive to build up heavy and chemical industries and started the Saemaeul (New Village) Movement aimed at raising rural living standards through a mixture of self-help works and state support.

In less than a decade, South Korea’s economic performance began to overtake those of Egypt and the Philippines, which were envied by Park and other coup leaders as the promising models for less-developed countries in the early 1960s.

By 1979 when Park was assassinated, South Korea’s per capita GDP swelled to $1,747, well-ahead of $419 for Egypt and $587 for the Philippines. Even after his death, the growth engine continued running through the harsh authoritarian rule in the 1980s and the ensuing democratic governments, placing the country’s economy at 15th in the world in terms of nominal GDP last year.

Among those who admit to the May 16 coup doing favors to the nation are some of the figures who led the students’ uprising in 1960.

The former student activists acknowledge that what they advocated during their pro-democracy demonstrations partly overlapped the pledges made by the military coup leadership.

“Underlying the sentiment that erupted into the students’ uprising was aspiration for getting out of the poverty and backwardness weighing on the country at the time,” said Lee Young-il, one of the student leaders at Seoul National University in the early 1960s.

“At first, I thought that the April 19 (students’ protest) fell victim to the May 16 (military coup),” he said. “But later I came to see the common aspects of the two incidents and view them in the same context of the modernizing process of a new state.”

Lee, who now heads the Korea-China Cultural Association, said Prime Minister Chang Myon’s government born out of the students’ revolution did little beyond adhering to democratic principles. He noted Chang’s administration lacked the ability to carry out the nation’s modernization by putting together the people.

Lee Sei-kee, who led the students’ movement at Korea University in 1960, said he felt shock and disappointment at the outbreak of the coup but gradually sympathized with its cause to modernize the country.

“It was a military coup that interrupted democratic procedures but I came to feel they (coup leaders) had taken the right path, watching the nation unshackled from extreme poverty,” said Lee, who currently leads the Korea-China Friendship Association.

He said that he now believes both the April 19 uprising and the May 16 coup should be understood as part of the process through which South Korea has grown into a key member of the global community.

Both of the former student activists said Park’s leadership should receive appreciation, noting he differed with other dictators in that he devoted himself to the cause of nation-building without seeking self-interest.

But sharp criticism is still raised against Park’s rule.

The negative view of Park’s era is connected especially with his iron-fisted crackdown on dissenters in the latter half of his 18-year rule.

Park, who was first elected to the presidency in 1963, earned a lot of respect from the public during his first two terms of office until 1971. If he had stepped down at that point, as required by the Constitution, he would have avoided standing in the way of the nation’s democracy by establishing a precedent for a peaceful transfer of power.

But apparently convinced he was indispensable in mantaining national growth, Park forced through a constitutional revision to allow him to run for presidency a third time. In 1972, he introduced a new “Yushin (revitalizing)” Constitution which abolished direct popular election of the president and had him re-elected for a six-year term in a vote by a rubber-stamp electorate.

Park continued to tighten his oppressive rule until he was assassinated in 1979 by Kim Jae-kyu, his top intelligence aide who had been scolded for his “indecisive” handling of opposition forces.

A brief period of democratization came to an abrupt end after a military mutiny led by Army Maj. Gen. Chun Doo-hwan, who maintained the iron-fisted rule until a massive pro-democracy movement in 1987 forced him to allow the people to choose a president in a direct popular vote.

Some progressive scholars have shed light on the negative legacies of Park’s rule, refuting claims the May 16 coup should be given credit for the country’s economic growth.

Kim Dong-chun, professor of Sungkonghoe University, told a recent forum in Seoul that the nation has had to spend the past two decades cleaning “garbage” left over from the modernization through Park’s authoritarian methods. He said it would “take at least half a century” to liquidate the negative legacies.

Im Hyug-baek, professor of politics at Korea University, also rebuffed favorable views of Park’s rule, arguing that the democratic governments installed since the 1990s have shown better economic performance than the authoritarian governments led by Park and Chun.

He noted that the democratic administrations have succeeded in taming high inflation and trade deficit ― the two chronic problems that resulted from the fast-growth policy pushed by the authoritarian governments.

Jang Sang-whan, professor of economics at Gyeongsang National University, said it is simplistic to justify Park’s dictatorship by saying his authoritarian rule was inevitable in the process of modernizing the nation.

“I would say South Korea has achieved fast economic growth despite Park’s development dictatorship, not owning to it,” he said.

Lee Young-il, the former SNU student activist, notes that the “paradox of development” may apply to Park’s rule. He sought to secure legitimacy by developing the national economy only to see protest against his authoritarian rule growing in tandem with improving economic conditions, Lee said.

“In this sense, the April 19 students’ uprising has an important meaning,” Lee said. “The memory of the massive protests across the country made Park and his authoritarian successors always aware and fearful of the public sentiment as well as giving the constant momentum for the pro-democracy struggle.”

Debates over the May 16 coup are set to have deeper political implications in the coming period as Park’s eldest daughter is gearing up for the next presidential election in December 2012 as the potential leading candidate for the ruling conservative camp.

In a 2007 debate, Park Geun-hye advocated the coup, describing it as “a revolution to save the nation.” Her comment sparked sharp criticism from liberal politicians and civic group members.

Park later apologized to those she “unintentionally disheartened” with her remarks, but still insisted the evaluation of the coup should be left to history.