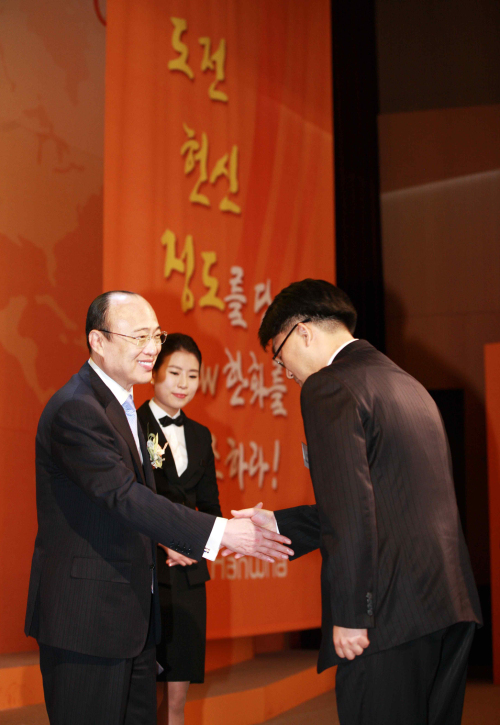 Hanwha Group chairman Kim Seung-youn (left) shakes hands with a representative of Hanwha employees at the ceremony declaring the group’s new core values at the Hanwha HRD Center in Gyeonggi Province on Monday. (Yonhap News)
Hanwha Group officials said that the three new core values were declared at an event on Monday that was attended by 300 executives including the group’s chief executive Kim Seung-youn, and the heads of Hanwha subsidiaries.

According to the conglomerate, the newly selected core values are “creative reinterpretations” of Hanwha Group’s traditional values of trust and loyalty, and reflect the group’s resolve to overcome the difficulties to become a “respected, global leader.”

“The core values announced today are beliefs that all employees must have in order for the group to become leaders,” Kim said at the ceremony. He added that the values embody the “Hanwha principles” of trust and loyalty, but adapted to the “era of global competition.”

“Witnessing the global stage go through a time of tumultuous change, I keenly felt the need to innovate past businesses, systems and operating methods.”

The group also plans to set up bodies in charge of innovating the operations at each subsidiary, and introduce a program to oversee the changes.