MOSCOW (AP) ― Patrick Chan played it cool, starting his short program with his hands stuffed in his pockets.

He couldn’t contain his enthusiasm a few minutes later when he saw his marks, and realized he’d set a world record. 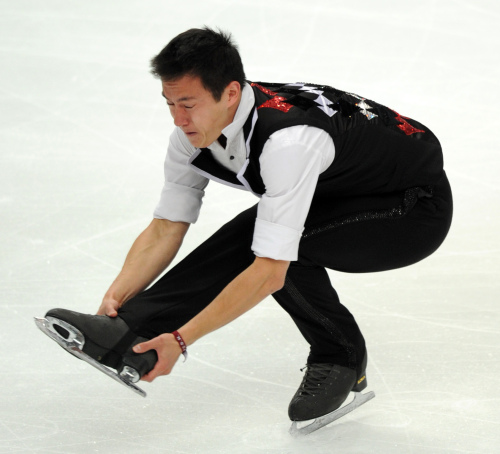 Canada’s Patrick Chan performs during the men’s short program. (AFP-Yonhap News)
The Canadian scored 93.02 points Wednesday at the figure skating world championships, giving the two-time silver medalist a wide lead as he seeks his first world title. His nearest challenger, Japan’s Nobunari Oda, was almost a dozen points behind and defending champion Daisuke Takahashi of Japan was another 1.6 further back.

In pairs, defending champions Pang Qing and Tong Jian of China were in the lead after the short program, followed by last year’s runners-up, Aliona Savchenko and Robin Szolkowy of Germany. Russia’s Tatiana Volosozhar and Maxim Trankov, who have been skating together only a year and are appearing in just their second major competition, were third.

“I knew that if I skated really well I would get in the high 80s, but I didn’t expect to get above 90 and that’s amazing,” said Chan, whose previous personal best was 88.90 at the Four Continents Championships in February 2009. “To set that world record is just a bonus and it just makes my smile even bigger.”

The world championships were to have been held in Tokyo in March, but the country’s devastating earthquake and tsunami and ensuing nuclear crisis forced cancellation of those plans. Russia and several other countries bid to be the replacement venue and the International Skating Union chose Moscow on March 24.

The backdrop of tragedy led to an opening ceremony at the competition that was far different from the garish cheeriness that usually characterizes skating ceremonies. As projectors sprayed images of the sea and squiggles like the needles of a seismograph on the arena’s walls, skaters in black and white swirled solemnly, then were joined by others in pink and white ― the colors of the cherry blossoms that Japanese love as symbols of hope and renewal.

Chan came in as the favorite to claim the world title after a commanding victory at the Grand Prix Final, and he didn’t disappoint with his record-setting short program. To the strains of the uber-cool jazz standard “Take Five,” Chan stood on the ice in a casual slight slouch, then got going fluidly and fired off a pristine quad-triple opening combination. Everything went his way afterward: clean landings, deft steps and a swift closing sit-spin. He led the field in both technical marks and program components, the so-called artistic elements of the program.

His score topped the previous record of 91.30 set by Evgeni Plushenko at the 2010 European championships.

“I have a hard enough long program, I can make a big pull,” Bradley said. “I laid the groundwork for tomorrow, keeping myself in the game so when I do two quads and two axels tomorrow, I can be competitive.”

“I’ve been training the program with two quads in it, so I believe it would be a disadvantage if I decided to swap everything and change everything and change the rhythm of my program,” he said. “I’m going to keep everything the same, and pretend as if tomorrow is another short program where there’s no results and we’re all skating a new program, skating for new positions.”

Oda, seeking his first world medal, planned a program a bit more challenging than Chan’s, with a triple lutz instead of the Canadian’s triple flip. But he stepped out of the first part of his planned opening quad-triple, skated to modern Japanese music tinged with a touch of the blues.

“I knew that I had to live up to a very high level of expectations. I wanted to end the season with a very good performance, that’s what I concentrated on, so I put out my best there today,” Oda said. “Knowing Patrick, I know he will perform his best tomorrow, so what I have to do is to put out my best. I don’t know if I can catch up.”