[ The Korea Herald – Send E-mail ]
Japan passes bill on return of Korean books
By 박민영
Published : Apr 28, 2011 - 16:24
Updated : Apr 28, 2011 - 19:05
The lower house of the National Diet of Japan passed a bill on Thursday on ratifying an agreement on the return of ancient Korean texts to Seoul. With the legal process necessary for the repatriation of the books virtually completed, officials in Seoul expect the books to be returned sometime next month.

The House of Representatives passed the bill a day after its committee on foreign affairs endorsed it. 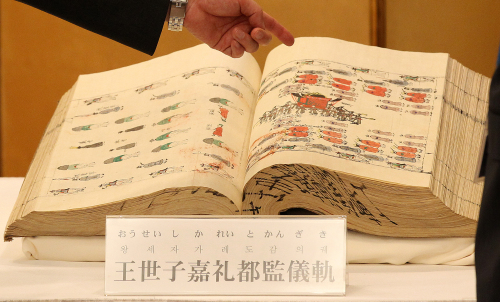 “Wangsejagaryedogam,” one of the Uigwe books which will be returned to Korea from Japan. (Yonhap News)
Japan’s upper house plans to open a session on May 13 to discuss the issue. However, when a treaty between Japan and another country is ratified by the Lower House, it goes into effect within 30 days, regardless of the Upper House’s decision.

Last November, Japan agreed to return a total of 1,205 volumes of archives, including texts of royal protocols known as “Uigwe,” that it seized from Korea during its colonial rule.

Japan’s Foreign Minister Takeaki Matsumoto is scheduled to visit Korea in May and President Lee Myung-bak will travel to Japan later that month.

Uigwe is a collection of books depicting royal protocols from the Joseon Dynasty (1392-1910). The books record procedures and formalities conducted for weddings, funerals, banquets and for receiving foreign envoys as well as cultural activities of the royal family.

Japan is known to hold 167 Uigwe books, including 81 originals, at its Imperial Household Agency. South Korea has 3,563 Uigwe books, among which 703 are originals.