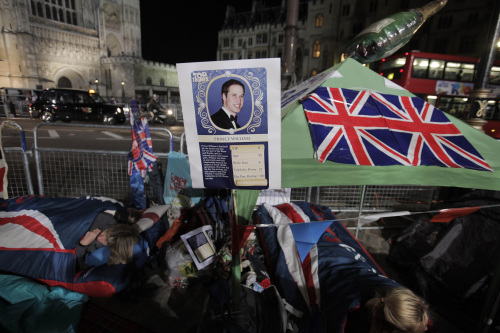 John Loughrey, 56, said he was never going to be anywhere else ahead of Friday's big day for Prince William and Kate Middleton.

A self-confessed "super-fan" of William's late mother Diana, princess of Wales, the former assistant chef from south London hit the pavement on Monday to ensure he is one of the first to see the newlyweds emerge from the abbey.

Splayed out on the flagstones with the London traffic roaring past his head, Loughrey held court amid baffled tourists and amused international news crews.

Wearing a "Diana would be proud" t-shirt and waving a British flag emblazoned with the happy couple's engagement portrait, the speed-talking Loughrey was in his element.

"Diana would be proud of her son Prince William and Catherine's marriage with Prince Harry as best man. She will be with them in spirit in Westminster Abbey on their special day and always," he said.

Loughrey camped out for four days for Diana's funeral in 1997 and attended every day of the inquest into her death.

"It's a great day for Britain to be proud," he told AFP. "We're known for this: our royal family, our special events, our eccentrics, we know how to celebrate. No-one does it better than the British people."

He added: "I was the first person here. I am a Diana super-fan. I'm as near as I possibly can be. I will shout 'Diana would be very proud'. I'm hoping to see Catherine's lovely smile."

Loughrey has a specially-commissioned beret to wear on the big day and said there was "no way" anyone would get a look at it early.

A few metres away, media student Lee Price, 22, from Milton Keynes, northwest of London, turned up on the spur of the moment, packing just his phone, his laptop, a few clothes and some money.

"Here I am. A weirdo in the middle of the street in a tent," he told AFP.

Within 10 minutes of pitching his tent, Price was being beamed to television stations around the globe.

"It's history in the making. That's the motivation. I'm going to be here for an iconic moment," he said, adding: "I'm here on stand-by. If Kate wants to leave William at the altar, I'll be here."

To those refusing to join in the fun, Price said: "I wouldn't say I'm much of a royalist but why not celebrate? Why not be positive about something?"

Meanwhile Guen Murray, 76, from Attleborough, eastern England, is a veteran of royal sleepovers. She brought her knitting with her to pass the time.

Murray hit the pavements for Diana's marriage to Prince Charles in 1981, Charles' second marriage to Camilla Parker-Bowles in 2005, and Prince Andrew's wedding to Sarah Ferguson in 1986.

"We expect to see the happy couple, all the royals and their guests," she told AFP.

She is one of three taking turns to mind the spot and hopes some of her grandchildren will be able to join them.

Armed with a tent, a sleeping bag and bolstered by some hot drinks, she said she simply wanted "to be part of it". 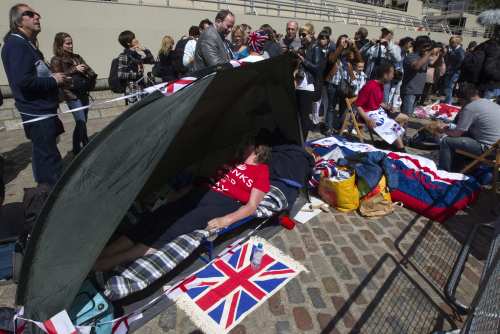 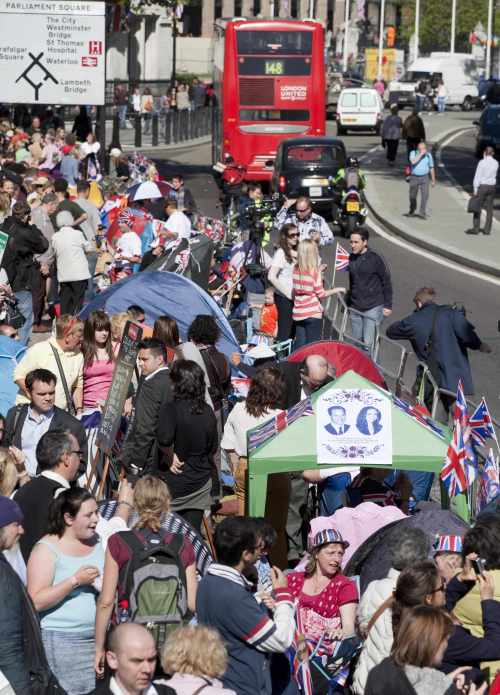