Spring may bring a welcome burst of warmth and renewal, but it is also a common time for people to fall sick.

With the change of season and scourge of yellow dust bringing on colds and sore throats in droves, many expatriates will find themselves making extra trips to the pharmacy. But for expats who favor an alternative approach, there is another option: a visit to one of Korea’s many Oriental medicine markets.

Seoul Yangnyeong-si is the country’s biggest, encompassing more than 1,000 businesses, from simple stalls to traditional clinics. About 70 percent of all transactions of medicinal herbs in Korea are carried out here, attracting traditional medicine doctors and the sick alike. The area itself has a history of treating the sick going back 600 years as the site of one of the four hospitals in the capital during the Joseon Dynasty.

Yangnyeong-si’s astonishing variety of grains, roots and leaves ― not to mention stranger offerings such as dried centipedes and deer antlers ― makes the market a sensory-rich experience for the uninitiated. But, when it comes to actually making a purchase, it can be difficult to know just where to start. 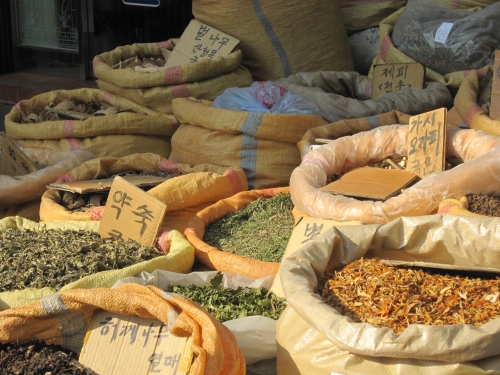 Some of the natural herbal remedies on offer at Seoul Yangnyeong-si. (John Power/Korea Herald)
Dr. Lee Jun-hyeok, of Korea Institute of Oriental Medicine in Daejeon, spoke to The Korea Herald about some of the ingredients expats unfamiliar with traditional Korean medicine can pick up to treat common ailments.

“Grab a handful of chongbaek and boil it with 2 liters of water. Take it as a tea without cooling. You will be recovered after sweating,” explained Lee.

For a sore throat, Lee recommends balloon flower root and licorice, which are both inexpensive and readily available. Balloon flower, or “doraji,” has large blue or white flowers but good quality root is thick, cone-shaped and white. Licorice, or “Kam cho” is often sold as a powder.

“You can put a half of handful of balloon flower and licorice into 2 liters of water and boil it,” said Lee.

“After boiling, turn down the heat and boil it again for 30 minutes. Then, drink only the liquid part.”

Lee said it is advisable to a visit a doctor if your tonsils are swollen or you have an infection.

Not only can a cold or cough be a damper on your day, it can interfere with your sleep pattern.

But Lee was quick to note there is no one-size-fits-all cure and a lot depends on the person.

“These are just a few examples, and it is impossible to cure every illness. It depends on individuals,” he said.

Of all traditional Korean medicine ingredients, ginseng, or “insam,” is perhaps the most famous. No Oriental market would be complete without it, and Yangnyeong-si sells the spindly root by the bucket load. According to Austrian-born Dr. Raimund Royer, of Jaseng Center for Alternative Medicine, the prized root is one of the most popular buys for foreign nationals here.

“That is something they like to purchase. As an energy boost, ginseng is very well known. Korean ginseng, the quality is very known worldwide,” he said.

But herbal treatment has its detractors. What would Royer say to the skeptical?

“I think it is a very good alternative to Western medicine. Usually it has very little or no side effects. I take it myself when I have problems ranging from a common cold to back problems.”

While both doctors stressed that serious health problems should be dealt with through a licensed doctor, Royer said a wander around an Oriental market is a good way to a get a taste for what is on offer.

Seoul Yangnyeong-si can be reached at Exit 2 of Jegi Station, Subway Line 1. Opening hours are from 9 a.m. to 6 p.m. everyday, except for the first and third Sundays of every month when it is closed.