The results of the scheduled consultations among senior officials from Washington, Seoul, Beijing and Pyongyang are expected to influence dialogue partners’ stance toward how best to tackle the issue of reviving the suspended negotiations as well as worsening food conditions in the North, analysts say.

Accompanied by three other members of the Elders, an independent group of former state leaders, former U.S. President Jimmy Carter will arrive in Pyongyang Tuesday, the group said in a statement.

It remains to be seen, however, whether the former statespersons will get to meet with the North’s reclusive leader Kim Jong-il, it said.

“This is an important new initiative for us as a group,” Carter was quoted as saying in the statement.

“At a time when official dialogue with the Democratic People’s Republic of Korea appears to be at a standstill, we aim to see how we may be of assistance in reducing tensions and help the parties address key issues including denuclearization,” the ex-President said, calling North Korea by its official name. 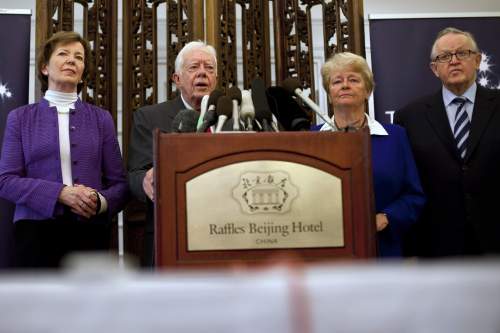 From left, former Irish President Mary Robinson, former U.S. President Jimmy Carter, former Norwegian Prime Minister Gro Brundtland, and former Finnish President Martti Ahtisaari answer questions at a press conference in Beijing on Monday. (AP-Yonhap News)
Carter, a Democrat from the state of Georgia who was president from 1977 to 1981, is well-regarded in North Korea and had visited the communist state as recently as August, 2002 to secure the release of a jailed U.S. citizen.

While hoping to reopen dialogue with Seoul and the other five partners in the denuclearization talks, Pyongyang continues to deny involvement in the two deadly attacks. The six-party nuclear disarmament talks involving the two Koreas, the U.S., China, Japan and Russia have been stalled since the end of 2008.

Ahead of its trip, the Elders had requested the Seoul government to explain its current position on Pyongyang’s attacks last year, indicating its willingness to discuss the issue with North Korean officials, Foreign Ministry officials here said.

The delegates from Washington are expected to meet with South Korean Foreign Minister Kim Sung-hwan, Unification Minister Hyun In-taek and possibly President Lee Myung-bak when they arrive in Seoul later this week, it said.

Coinciding with Carter’s trip to Pyongyang, Beijing’s chief nuclear envoy Wu Dawei was to arrive in Seoul Tuesday to discuss the resumption of the six-party talks possibly through an inter-Korean nuclear dialogue.

After meeting with his North Korean counterpart last week, Wu had suggested that nuclear envoys of the two Koreas meet to pave the way for larger-scale denuclearization talks, a proposal South Korea said it was ready to accept.

The North, which refuses to add nuclear issues to the agenda of inter-Korean dialogue, has so far made no comment on whether it is willing to take up China’s offer on the issue. Pyongyang claims it does not have to discuss denuclearization with Seoul as its nuclear weapons are not aimed at attacking Seoul, but as deterrence against the United States.

While wary of further provocations by the North, Seoul and Washington appear willing to resume talks once Pyongyang presents proof of its denuclearization efforts and apologizes for the attacks.

The two longstanding allies are also continuing their efforts to have the U.N. Security Council condemn Pyongyang’s new uranium enrichment activities. Their efforts in February to address the issue at the Security Council meeting failed due to objection by China, the North’s historical ally.

Meanwhile, the so-called “two plus two” security talks of South Korea and the U.S. will be held in Washington Tuesday, Korean time, also affecting the ongoing diplomatic discussions over Pyongyang’s denuclearization.

South Korea’s Deputy Foreign Minister for Political Affairs Kim Jae-shin will meet with U.S. officials, including assistant secretary of state for Asian and Pacific Affairs Kurt Campbell, during the talks to discuss bilateral ties and other pending issues, the Seoul government said.