According to the Supreme Court, a group of seven high-profile Vietnamese judicial figures, including the vice president of the Supreme People’s Court of Vietnam, arrived in Seoul on Sunday to visit South Korea’s state institute for training lawyers and a computer center of the top court. 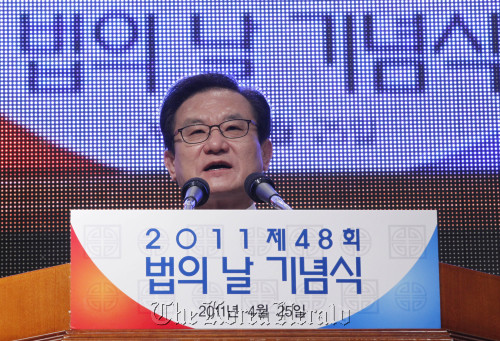 Justice Minister Lee Kwi-nam speaks during a ceremony to mark the 48th Law Day at the Supreme Prosecutors’ Office in southern Seoul on Monday. (Yonhap News)
Since 2002, the court has supported Vietnamese legal officials’ visits to South Korea and their training courses at the Judicial Research and Training Center (JRTC), a court-run institute to educate legal professionals, to promote exchanges with the Vietnamese judiciary. The institute is located in Goyang, just northwest of Seoul.

From 2008, the court began a full-fledged effort to help mend the Southeast Asian nation’s legal system, supporting the establishment and management of the country’s own educational institute for legal trainees in cooperation with the Korea International Cooperation Agency (KOICA), the state-run foreign aid agency.

Vietnam has long asked for Seoul’s knowhow in educating judges as most of those overseeing local courts do not have official law degrees, according to the Supreme Court. In response, South Korea has been sending JRTC professors to advise Vietnamese officials on how to design curriculums for undereducated legal experts since 2009.

The paperless filing system, under which court filing and service of documents are done online, will expand to civil cases next Monday, it noted, adding that South Korea is one of the first countries in the world that applies a single electronic litigation system to the entire nationwide judicial organization.

Even Japan, which South Korea set as an example of a modern legal system decades ago, sent its officials to Seoul to tour the Supreme Court’s computer network center in February.

South Korea’s Chief Justice Lee Yong-hoon will travel to Iran on Monday and give advice to the Middle Eastern country, which plans to introduce an electronic case management system. He is also scheduled to promote the computerized system at the Conference of Chief Justices of Asia and the Pacific slated for June in Seoul, said the court. Chief justices from the participating countries will visit the court’s computer center as part of the conference, it added.

“As trade with other Asian countries and international marriages have become active, there is a growing number of legal disputes involving these countries,” said an official at the Supreme Court.

“If South Korea and other Asian countries have much in common in their legal dispute settlement systems, our nationals will be able to deal with disputes with foreign countries more effectively and it will become easier for our companies to advance overseas.”