While Chevrolet is a U.S.-based brand, the developments have significant implications for South Korea’s automotive industry.

According to GM Korea chief executive Mike Arcamone, 93 percent of the company’s output is built as Chevrolet vehicles, and the company was responsible for producing about a quarter of the 4.25 million Chevrolets sold last year. 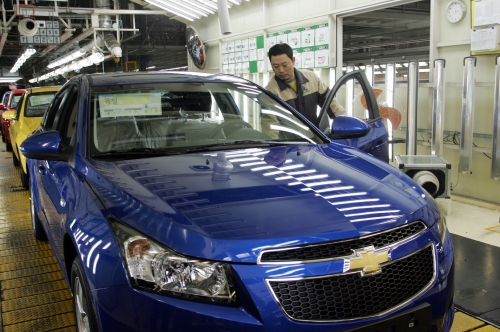 “Including CKD (complete knockdowns), about 460,000 Chevrolet vehicles were produced in Korea, but in terms of assembled vehicles about 160,000 units were produced by us,” a GM Korea official said.

In addition, the compact car Chevrolet Cruze, the development of which was led by GM Korea, played a significant role in pushing up Chevrolet’s first quarter sales to record levels, with about 150,000 units of the vehicle sold worldwide during the period.

“We produced about 53,000 units of the Cruze in the first quarter. The vehicle is also produced by plants in China and the U.S. but they mainly cover the local markets, so we also function as an export base.”

As a brand, Chevrolet is GM’s largest, and one of the world’s fastest growing marques and accounted for 5.8 percent of global automobile sales last year.

As such, the brand’s expansion has allowed GM Korea to significantly increase its exports since its establishment in October 2002 when GM took over Daewoo Motor.

Aided by its parent firm’s much larger global network, most of the growth GM Korea has seen since 2002 has come from overseas markets.

Although the company’s export-focused operations have allowed it to ship out significantly more than its domestic sales, such methods have not been without drawbacks.

In comparison, domestic sales of Renault Samsung Motors Co., GM Korea’s closest rival in terms of domestic sales, rose from the 110,000 units recorded in 2003 to more than 155,000 units last year.

GM Korea, has however began to place more emphasis on the domestic market beginning with the corporate name change from GM Daewoo and replacing the Daewoo brand with Chevrolet earlier this year. While the benefits of the decision remains to be seen, the company has seen March sales rise by 30 percent from a year earlier following the changes.