After over half a century of diplomatic relations, Brazil has chosen Hyundai Group chairperson Hyun Jeong-eun to represent Brazil’s interests in the southern part of the nation. 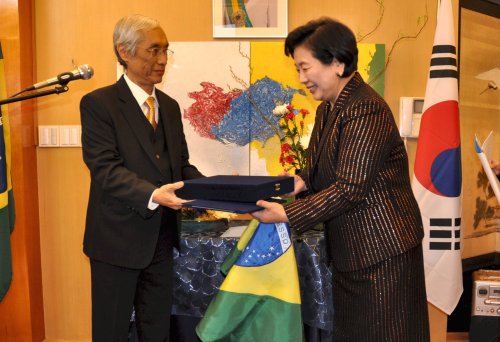 Last year, Norwegian magazine TradeWinds chose Hyun as one of the most influential people in the world’s shipping industry.

In 2008 and 2009, Forbes magazine listed her as one of the 100 most influential businesswomen in the world.

Putting all the accolades aside, it was the personal relationship with Fujita that made Hyun a perfect choice to head up the honorary consulate in the southern part of the country.

“It’s really just a clinching of spirits,” he said. “The first time we met we had a very good conversation, we kept in contact talking businesses in both countries and how it could be improved, so I thought why not her to fill the role of honorary consul.”

Hyun took over the reigns in 2003 after the death of her husband and then-chairman Chung Mong-hun.

“We really want to have a more active presence in as many places in Korea as possible but since our diplomatic service is not that big, we have to ask for help from the local people who have very good connections and facilities to help us,” he said.

In Japan for example, Brazil has six honorary consuls.

Fujita added that while the relationship is growing between the two countries, so are the demands down south for consular services, handing out information and organizing trade missions

“This shows how important relations between Brazil and Korea have become,” he said.