To change popular conceptions of Pakistan, the embassy organized an event for primary school-age children and their parents. 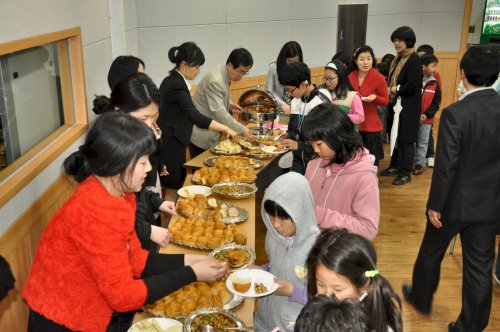 Elementary school children line up to sample Pakistani food.(Yoav Cerralbo/The Korea Herald)
Held at the National Library for Children and Young Adults in Gangnam district, the ambassador and his team left the confines of the chancery and went straight into the hearts of the future.

“They are the future leaders and in 20-25 years they will be in a position to make important decisions so I thought it’s a great idea to meet the children and talk about Pakistan and show them our cultural places,” said Pakistan Ambassador Shaukat Ali Mukadam.

Within moments of the PowerPoint presentation and information session, they were giving rows of wide-eyed children a new image of an exotic foreign land.

“I want to project our culture and talk about our friendship and show the Korean people the tourism locations, about how our children live, our schools and universities,” he said.

What really picked up the children’s attention came when the ambassador showed pictures of the diverse travel destinations Pakistan offers.

“We have the second highest mountain peaks in the world and it’s a country with four seasons and with a lot of places to visit and enjoy,” said Mukadam.

From the biggest to the smallest embassies, people-to-people diplomacy has become an important factor in cultural and public diplomacy.

The ambassador plans to take his information road show to different universities and colleges in the nation with the hope of enlightening students’ perception of a country that has been shaped lately by negative images and stereotypes in the world press.